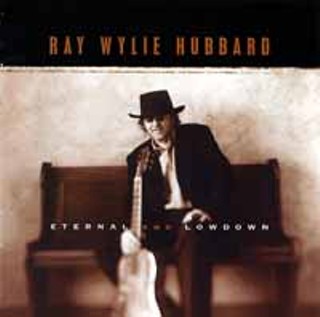 In the past decade, Ray Wylie Hubbard has become one of the best singer-songwriters of our time. Since 1992, he's released a series of albums, each more impressive than the last, filled with songs and stories that are pensive, witty, and filled with vivid imagery, all hung on musical frameworks either spare and sensitive, or no-holds-barred rockin'. All leading up to Eternal & Lowdown, his latest -- and greatest. One major change is that this marks the first time Hubbard has worked with producer and guitarist Gurf Morlix (Lucinda Williams, Slaid Cleaves), who blends his bluesy guitar style and economical backdrops with Hubbard's lyrical vision to create pure magic. Between the rapid-fire Dylanesque delivery of spirited opener "Three Days Straight," the clanking and clattering gambler's lament "Mississippi Flush," the swampy blues of "Weevils," down to the tired and dusty "After All These Years," Hubbard weaves a spell that recalls past musical gurus like Lightnin' Hopkins and Townes Van Zandt, yet remains true to his own singular voice. Particularly poignant is the gospel-inflected "Didn't Have a Prayer," which finds Hubbard singing in a voice quivering with emotion, an undoubtedly autobiographical account of his struggle with life's many demons: "I need to get me, I got to find me, I got to have me, a little peace in my heart." Such moments of naked honesty are rarely revealed by any artist, yet Eternal & Lowdown is filled with flashes of equal intensity. A gem.