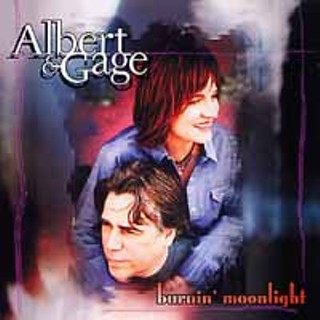 The engaging singer-songwriter team of Christine Albert and Chris Gage demonstrate the art of good album making so effortlessly on Burnin' Moonlight, it's a lesson to remember. Moonlight follows the reissued Jumpin' Tracks, originally recorded under the name Boxcars in 1997 to unanimous critical acclaim, and proves the Austin duo is no one-trick pony, but a welcome return to the tradition of great male-female singing partners. Burnin' Moonlight shines with a dozen cuts that never veer far from the well-crafted country pop introduced on Tracks. Although the album's country flavor places them squarely in the Southwest, part of it was recorded in Germany. "Standing at the Wall" is a sober tribute to the experience, much as "Hey Jimmy" remembers departed friends like Walter Hyatt. But such somber moments do not dominate the spirited offering. Six of the LP's 12 cuts are Gage/Albert collaborations, including duets "Time Flies" and "Life Is A Miracle." Dan Hicks is dusted off in a jaunty rendition of "Up Up Up" and Albert's crystal voice polishes Iris Dement's "My Life." The gospel-inflected "I'll Be There for You" and honky-tonk piano of the title track put the spotlight on Chris Gage; Christine Albert steps forward with "Can't See the Light" and "Tumbleweed," but it's "I Used to Be Lonesome" that blends them together so seamlessly it cries "radio-friendly." Still, a Bob Dylan song is almost always guaranteed to be a showstopper, and thus was "Forever Young" obviously chosen to close the album. Its lovely prayer-like sentiment is beautifully framed by the duo's intertwined, yearning voices, leaving a glow as luminous and bright as moonlight itself.