In the Mud (Bloodshot) 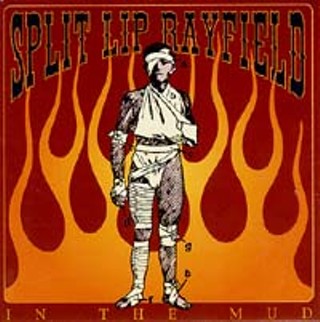 In the Mud (Bloodshot)

Ever go for a ride with someone driving waaay too fast in a trashed out '71 Buick? Someone who's good enough to handle it -- keep the car between the ditches -- while your butt pinches buttons out of the stained, threadbare upholstery in exhilarated terror? Split Lip Rayfield follows through on their head-spinning live performances at SXSW 99 with In the Mud, a mixture of the Bad Livers, Bela Fleck, and Slayer. The playing is enough to raise blisters on unprotected skin, diarrhea spurts of 1/128 notes on guitar/mandolin, punctuated by the occasional absurd-sounding break and lyrics about drinkin', fightin', and killin'. High-lonesome vocal harmonies and traditional instrumentation (except the trademark bass made from an auto gas tank) nominally bring this band under the "bluegrass" category, but the ferocity of the playing and desperation of the lyrics would have Bill Monroe spinning in his grave like a chicken on a spit. The occasional break finds Split Lip venturing into murder-waltz or Django Reinhardt gypsy-jazz, only to hurl the listener back into amphetamine-paced breakneck jams. Split Lip's forerunner Scroat Belly ventured down the same path with electric instruments, but this band has progressed light-years beyond Scroat Belly. Imagine if Earl Scruggs put away a fifth of Old Grand-Dad, mixed it with some biker speed and LSD, and then got sucked into a tornado for 40 minutes. This exhausting journey into high-lonesome hell and back will leave you dazed and bleeding, only to reach for the "play" button on your CD deck and start it all over again.