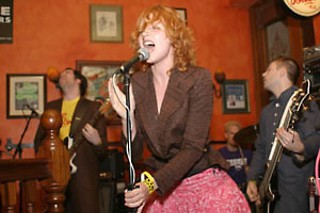 B.D. Riley's, Thursday, March 18 First off, B.D. Riley's ain't exactly the most band-friendly venue on Sixth Street. The stage and PA didn't work in Kristofer Alstrom's favor last night; his introspective acoustic guitar singer-songwriter material would've worked better for a happy hour in some downtown bar. Alstrom's got a good voice and decent skills on the guitar, and occasionally comes across with compelling lines. ("Drunk and weary outside your door" and "I am cornered in this town.") Unfortunately, the Stockholmer's songs become repetitious quickly, with equal amounts of "oooh-aaaahs" and "mmm-mmms" padding out their running times. It might be interesting to hear Alstrom fully realized, with a band fleshing his songs out. Also from Stockholm is Holden, a fourpiece with a female lead singer who could easily find a second career as a model or aerobics instructor. Holden practices what Eighties writers used to call "angular, jagged pop," reminiscent of Gang of Four or Echo & the Bunnymen, complete with clanking Rickenbacker bass and keyboard-as-rhythm-instrument. Lead singer Jenny, decked out in white Eighties winkle picker boots, even took an excursion or two into the crowd and put out twice the energy of most bands (somehow without breaking much of a sweat). The 1986 feel continued with a third Stockholm act, Kamera, a fey, androgynous, faintly morose band that called to mind the Smiths, OMD, and Ultravox with their sleek, stripped-down brand of New Wave. With their gooshy synthesizer and sequencer laying down rhythms, the only thing the band needed was the splat of an electronic snare drum to round out their mid-Eighties feel. And that's not a put-down. There was plenty of Eighties music that sounded fresh and energetic at the time – certainly better than the pedestrian hard rock and metal that was going around then. What's a little disturbing, though, is the notion that most of these bands were in grade school the first time this brand of New Wave came around, and that the Eighties are far enough back now to actually become "nostalgia." Sigh. Sweden's Kamera and Holden have the right idea about Eighties pop anyway. 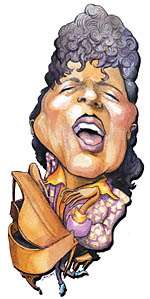