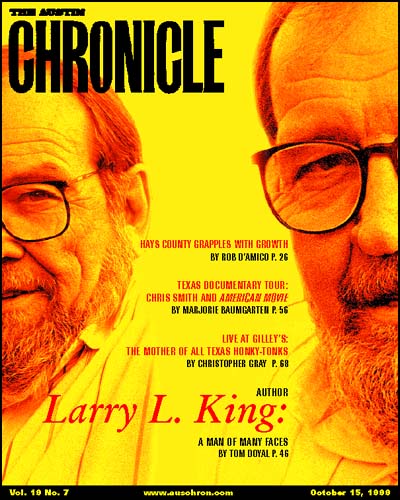 South Austin Democrats give Mayor Kirk Watson the Yeller Dawg award of the year, Geoff Rips goes to work for AISD, City Council will have new meeting places next year.

Chronicle food writer Rachel Feit went to Mama Mia’s looking for her Big Night, but found instead the sort of place that put the little restaurant in Big Night out of business.

The Texas wine industry has certainly come a long way since the first vineyards were planted by Spanish monks nearly 400 years ago. A recent state government plan could help the industry grow even more.

On Good Land: The Autobiography of an Urban Farm

The Mother of All Texas Honky-Tonks

A look back at the Mother of All Texas Honky-Tonks

The ABC's of Anarchism, Nursery Rhymes & Other Fun Songs

From Ethel Mertz to Margaret Cho, we examine how the small screen has portrayed big women; also, a look at Louis Theroux's Weird Weekends.

sex, lies, and videotape; King of the Hill; Out of Sight

There's no middle ground in Fight Club: Either you go with its berserker ethos or go nuts.

Mating Habits of the Earthbound Human

The Story of Us You don't hear much about Wayne Bell when the Long Center for the Performing Arts is discussed. That may be because this honored Austin architect is low-key, modest, the consummate team player. But he's the point man on this $60 million project and arts writer Robi Polgar reveals how integral he is in getting it built in a calm, orderly, informed, and successful way.

How to Hire an Architect

Forward motion on a renovation of UT's Harry Ransom Center and the lack of motion in the design of the new Blanton Museum of Art.

The Rocky Horror Show: Spaced Out on Sensation

The Threepenny Opera: A Snarl of Theses

The Statesman is back to its old ways.

Fundraising season is upon us ...

Close encounters of the illegal kind.

Old Settler's Park in Round Rock is one of the best city parks in Texas.

In this year's Super Bowl: Rams vs. Titans?

Another compound from the Amazon rain forests can help HIV+ patients.

Is "progress" an unconscious compulsion?

Baseball enthusiast Lisa Tozzi takes a trip to Detroit and memory lane as she visits Tiger Stadium on the eve of its destruction.