The ABC's of Anarchism, and Nursery Rhymes & Other Fun Songs (Seeland) 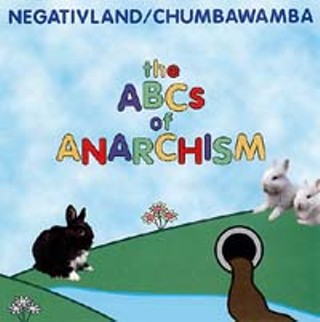 The ABC's of Anarchism (Seeland)

After a late night of partying, we find ourselves at the 24-hour Sambo's, bored, waiting for a table. As the letters "T,""H,"and "C" dance merrily around our heads in various permutations, we rearrange the marquee greeting, "Please Wait to Be Seated" to read "Please Be Wasted to Eat," erupting into peals of laughter as customers encounter our handiwork. Boy, we're awfully clever, which is exactly how the dudes in Negativland must feel with each new album. For two decades now, the California collage collective has been challenging notions of intellectual property and artistic intent by turning the vague restraints of copyright terms like "fair use" into fair game. By pushing the rigid boundaries of copyright law and forcing a debate about art vs. commerce, the sample-happy smarties have themselves become part of the intellectual property discourse as the subjects of lawsuits, most notably one in which Island Records sued Negativland in 1991 over a single called "U2." Just as recombinant as anything they've released to date and twice as sophomoric, the band's latest release, The ABC's of Anarchism, clearly bearing the symbol "N©," takes on the holy cows of political theory and children's media exposure. Named for the 1929 Alexander Berkman book, The ABC's of Anarchism is a three-song re/deconstructivist free-for-all that brings Negativland up-to-date for 1998, as they tubthump sampled Teletubbie tunes and those of millionaire anarchists Chumbawamba into tools of the revolution. While the line between homage and a good spanking is often a fine one, the purpose lies more in how the elements are reassembled and who is juxtaposed. Slamming Ice Cube into the Teletubbie theme is gut-laugh brilliant, as is the creepy surprise appearance of M*A*S*H theme, "Suicide Is Painless." Doris Lessing, Spice Girls, Noam Chomsky, Cookie Monster ("© Is for Stupid"), WWF, PBS, and the BBC get equal skews and skewering in these expositories on anarchy and dirty water. Like Negativland, the Teletubbies themselves wrangle and reinvent culture, but in their case, to entertain and influence small children. The subtext is that of signals broadcast and received (Tubbie tummies are, after all, warm and fuzzy TV screens), training all of our kids to be good little image processors. While Nursery Rhymes & Other Fun Songs! doesn't cruise along to the raving techno ambiance of the first TT disc, it's still chock-full of the giddy giggles and silly sing-song snippets of our roly-poly revisionists. Popular kiddie ditties like "Jack & Jill" and "Twinkle Twinkle" are grabbed out of thin air, received on Teletubbie antennae, and tubbiefied into totally new forms. The take-home message here is that media is everywhere. From Pepsi commercials and political manifestos to radio waves and cell phone signals, we are constantly bombarded with information, whether we want to tune in or not. The Teletubbies are simply the preschool manifestation of this ominous reality. Negativland have made a career of wresting the ammo in the communications war and turning it on itself, and the Teletubbies are an armory ripe for reappropriating. Again! Again!