This week it's all about the Tops and the Bottoms, loves. How do you like your 2013? It's Gay Place tradition to not only bust out the best of the year in rearview, but to also consider the view from the bottom. Some of us are more adept than others, obviously, and you can see individual Gay Place Krewe lists with links online at the Gay Place Daily (austinchronicle.com/daily/gay-place). This was a big year for the GP, one in which new ponies entered our stables, making our daily online coverage prance. We're thrilled that you turn to us each week for your Austin LGBTQ info and hope to continue being your source in the new year. On to the lists!

2) 'BEHIND THE CANDELABRA' was a puddle of something dripping from Michael Douglas' massive, manly chin to imply that he really isn't gay after all, and he has the cancer to prove it. Soderbergh! Liberace! Squeee!

4) MIA MCKENZIE Blogger's Black Girl Dangerous is a QPOC and supporter lifeline, and her debut novel raked in all the queer/lesbian writers awards this year including the Lambda Literary Award for debut fiction.

5) TEXAS' WOMEN OF JUNE Groups like Rise Up Texas and Stand With Texas Women fight many of the same fights we fight. And the evidence of LGBTQ supporters and elected reps was inspiring. Wendy Davis wore the shoes, and this June at the Capitol, the queers came out to stand up proud alongside.

6) MADDOW AT SXSW Her conversation was a conversation-starter, and her presence energized SXSW queer visibility.

7) STATE REP. LON BURNAM Bless his heart! (And we mean that sincerely, not in that sarcastic Southern way.)

8) LAVERNE COX Won our hearts as Sophia on Orange Is the New Black. By now she owns them. Kickass actress and a needed voice for trans* activism.

9) ANNISE PARKER RE-ELECTED Just, ya know, Houston's first openly gay mayor re-elected for her third time in November. She and longtime partner are planning their wedding.

10) BEST GAWKER COMMENT ON ROBIN ROBERTS' LAST MINUTE 2013 COMING OUT "Thanks, Ms. Roberts. There's a sporty 12-year-old lezzo out there somewhere whose life y'all just made a little bit easier. All y'all who are riding the NBD train, are straightup wrong. It's not about big city folk saying 'Oh we knew that already,' it's about small town folks, and perhaps more importantly, black folks saying 'Oh, she seems like such a nice, smart, successful, normal person, maybe our kid will be ok after all.'"

1) TEXAS NATIONAL GUARD "All military spouses, regardless of orientation or gender, deserve to be treated with the same dignity, respect, and support for their sacrifices in support of our nation, no matter what state they serve in." – American Military Partner Assn.

3) FANTASY'S SHOW & TELL Brainchild of Stanley Roy, this once-a-month all-tell/all-show is hosted by genderfuck cutie Fantasy who likes to shake his dickey at those he admires (no, literally, a dickey).

4) AUSTIN PRIDE PARADE Our coveted Gay Place Moonpies are not free. Only those with the boldest buttocks went away with a prize. "Twerk! Twerk for Moonpies!" And on that most magical of nights, you twerked.

5) CHEER UP CHARLIE'S NEW DIGS Year-end news of CUC's lease nonrenewal sent the kids into the stratosphere. News of them signing a lease on the old Club de Ville/Chances brought us back down to Earth again.

6) FREE & QUEER CINEMA The three words sum it up. It's free. It's queer. And it's a helluva second date. January's movie: Bound.

8) SAN MARCOS' SILVIA SANDOVAL This one-woman queer cheer squad has successfully run SM's Rainbow Night for years. Now, she's pulling together the town's first official Gay Pride and attempting to launch the first gay bar. Next year, we hope to report on the folks who came to her side to help, realizing that it takes a village, not just one cool mama.

10) THE Q'S JR RANGERS SAFE SEX CAMPAIGN A throwback to boys in the woods (merit badges, "How to Survive a Bear Encounter," plaid ...) are nothing short of inspired. 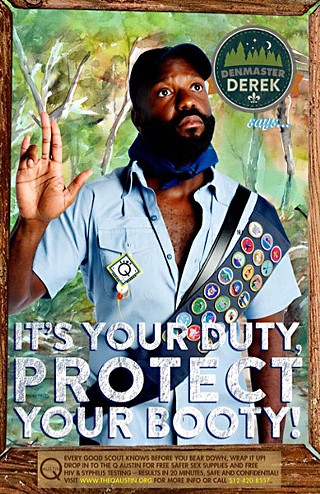 1) OVERRATED NINETIES LESBO ANGST POSTERGALS COME OUT (AS JERKS) You were shocked at Michelle Shocked? Really? She had a song called, "Don't Ask" and another called "Don't Tell." C'mon. And Ani DiFranco? She probably got a very good rate on that plantation. Yes, Ms.sa. The only thing more not surprising was the online panic that ensued with Facebook friends facing off to attack, defend, then defriend.

4) QUEER QUESTIONS TOWN HALL MEETING Intentions vs. impact? Hmmm. Folks on all sides of that meeting left dejected, unheard, flattened out, and frustrated. Fracturing is healthy for communities, sometimes, but the discussion of art and representation was unnecessarily two­-dimensional – and the facilitators' sangfroid wasn't helpful in that regard.

5) POPPERS PRICE INFLATION The government crackdown leads to increased difficulty getting things down your crack.

6) FIRINGS AT LOCAL LGBTQ NGOs While we admire the new crew at Q (and the new peeps at PT, and the ongoing soap operas of other nonprofits), we feel sad and beaten down at the horror stories of nonprofits wiping out one staff to build another, reminding us every day of the awful reality of what life in a "Right-to-Work" state in a shitty economy is and that despite the noble causes served, most local NGOs mimic corporatocracy. And sure, newspapers are no better, but hey, sue us for dreaming that noble causes run in the blood and transcend the balance sheet, the egos, and the shit storms, local edition.

7) ANTI-TRANS* VOTER ID BILL Who are you? Are you sure? May we see some ID? Um, thanks, now some more? Who did you say you were?

8) ELISA CHAN Doubled down on her anti-LGBTQ rhetoric ... and benefited politically.

10) DAYNA MORALES Crying wolf on discrimination is totally disrespectful to those dealing with real bigotry.

HAPPY HOUR WITH MS. WRIGHT The legendary Ms. Wright on the black & whites is a great way to kick off your weekend. Thursdays and Fridays, 6-8pm. The Skylark Lounge, 2039 Airport. Free.

twelfTH NIGHT AUSTIN PARADE & BALL Do you have your krewe together? Austin kicks off the Mardi Gras season with this wondrous procession (from Coco Coquette), coronation (vote online for a king and queen now!), and afterparty/ball (this year, at the Scoot). Sun., Jan. 5, 8pm-2am. Parade launch: Maison d'Etoile, 2109 E. Cesar Chavez; Ball: The Scoot Inn, 1308 E. Fourth. $5. www.12thnightaustin.com.

BEDPOST QUICKIES: FROM PAGE TO STAGE New! Free! Five minutes! Go! Yes, it's Bedpost open mic. And boy, do they mean open. You get to read all that steamy stuff that's been welling up ever since your first Bedpost Confession. Tue., Jan. 7, 6pm. The North Door, 502 Brushy. Free. www.facebook.com/bedpostconfessions.

BENEFIT FOR BEN BRUCE/ANNIE DEPRESSANT Sometimes, life hits you like a truck. And in the case of our dear Annie D., sadly quite literally. The gang at Elysium and a lot of dragsters are throwing this benefit. Tue., Jan. 7, 7pm. Elysium, 705 Red River. $5 donation. www.facebook.com/john.elysium.

OUT WITH THE OLD ... IN WITH THE NEW LADIES NIGHT The Lesbutante and the Boss host another ladies night. Wed., Jan. 8, 6-9pm. The Chicago House, 607 Trinity. Free. www.facebook.com/thelesbutanteandtheboss.

FANTASY'S SHOW & TELL A first for the new year and a last for Cheer Up's. Fantasy hosts 10 of you brave show-ers and tellers. Wed., Jan. 8, 7pm. Cheer Up Charlie's, 1104 E. Sixth. Free. www.facebook.com/stanley.r.williamson.

MR. COOK'S STRIP-OFF It's a competitive, amateur taking-off of the clothes. Thursdays, 12am. Rain on 4th, 217 W. Fourth.

Many thanks to the entire Gay Place Krewe for their fun and thoughtful individual lists and their contributions to this group list: Andy Campbell, Rob Cohen, David Estlund, Jordan Gass-Pooré, Nina Hernandez, Sarah Marloff, and Brandon Watson.