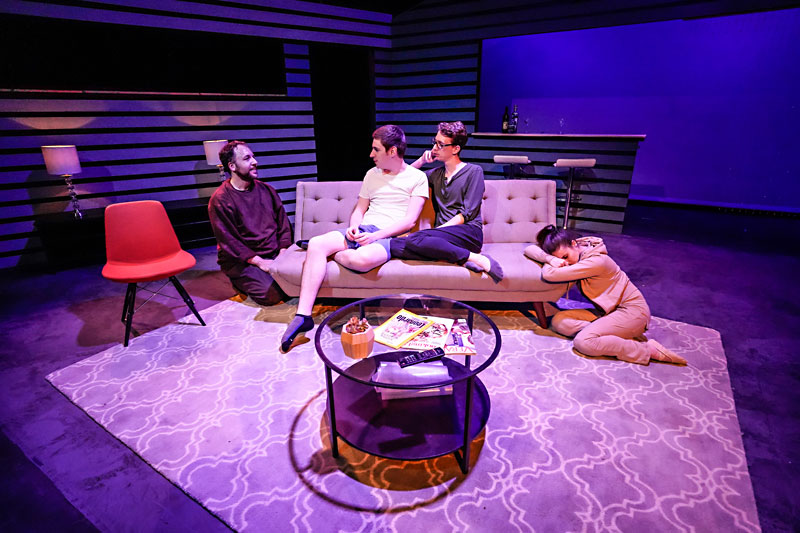 Serious question: How could a pet owner read a tagline like "What if you and your dog could talk?" and not be immediately enthralled? I'd like to think it was my love of unique storytelling that drove me to attend Dex & Abby, but if I'm being honest, it was because I'm a dog person. By celebrating the bonds we cherish with our four-legged companions, playwright Allan Baker's latest work aims to pull the heartstrings of animal lovers.

Despite its far-out premise, Ground Floor Theatre's world premiere, directed by Robert Tolaro, grounds itself in reality. The story of the titular canines is as much the story of their owners, Sean and Corey – a couple taking their relationship to the next level by moving in together. The uncertainties these young partners face is reflected by the rivalry of their pets, who compete for both affection and attention.

As the title implies, the backbone of the show is the portrayals of Dex and Abby by Jason Graf and Cassidy Timms, respectively. Most impressive is these performers' primal physicality. Graf and Timms carry themselves with excitable, purposeful energy that's no doubt the end result of studying canine mannerisms. Whether they're getting riled up for walks or snuggling up to their humans, it's difficult to see these actors as anything but lovable house pets. The sincerity these two bring to their roles creates believable bonds between dogs and humans.

Fueled by these genuine character connections, Baker's script focuses on the seemingly mundane moments that make up life: dinners with friends, evenings on the couch, late-night heart-to-hearts, etc. While Baker succeeds in creating a realistic slice-of-life piece, it often comes at the expense of narrative momentum. Certain scenes (predominantly in Act I) feel weighed down by meandering dialogue and lack of focus. That's not to say there aren't moments of well-executed character development, but for every scene that advances the plot, another feels like it's simply killing time in these characters' living room.

Despite these unfocused scenes, hidden away in Dex & Abby's two-hour run time are all the elements of an engaging narrative. While I'm left with the impression that this show could be whittled down to an hour without losing any emotional weight, I was nonetheless moved by its displays of tenderness. Scenes where owners talk directly to their dogs, for example, reveal just how nuanced man's relationship with beast can be. Here we learn that Sean's family shunning him for his sexual orientation is mirrored by Abby's abandonment as a pup. Meanwhile, as Corey (Jacob Bernelle) begins to open his heart to Sean (Will Douglas), he draws strength and comfort from Dex's undying loyalty.

Ultimately, Dex & Abby accomplishes what it sets out to do: give voice to the unspoken connection we feel with our furry friends. As a dog owner, I was moved by the heartbreaking conclusion. (I challenge any pup-parent lover not to cry at a tragic narrative involving a dog.) Afterward, I hugged my Jack Russell mix tighter than usual, though I couldn't help but reflect on the show's tagline. Based off what I saw, not much would change if our canine friends could talk. With unconditional love, dogs prove every day that they're man's best friend. Given the chance, it seems they'd only reaffirm this fact.

Ground Floor Theatre, 979 Springdale
www.groundfloortheatre.org
Through June 1
Running time: 2 hr.
A version of this article appeared in print on May 24, 2019 with the headline: Dogs’ Journey