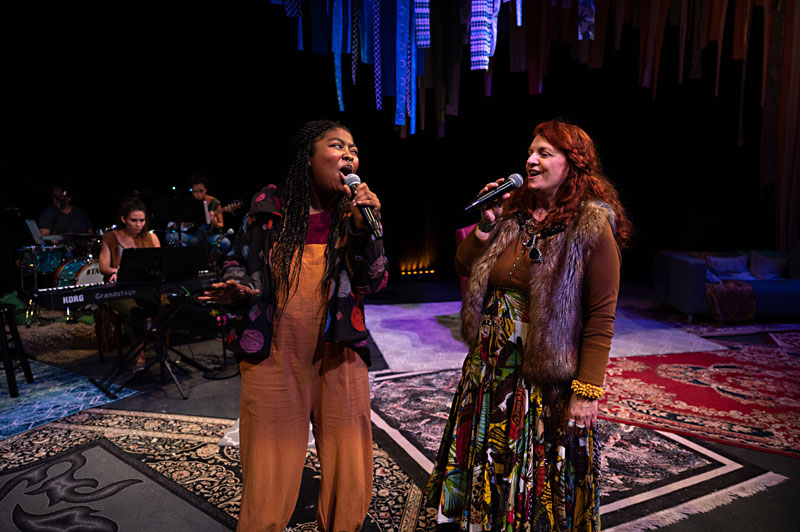 The musical Unexpected Joy checks quite a few boxes for East Austin's Ground Floor Theatre, whose mission mandates the production of works that "lift voices that need to be heard."

Premiering in 2016 and with a short 2018 off-Broadway run, it follows Joy (Cathie Sheridan), a free-thinking baby boomer and recording artist, who is preparing for a Provincetown farewell concert to honor her deceased life partner and the male counterpart in their renowned musical duo. When her tightly wound conservative daughter Rachel (Amber Quick) and rebellious teenage granddaughter Tamara (Caroline Mullins) arrive from Oklahoma, neither are aware that Joy is in a new relationship with "lesbian warrior" Lou (Michelle Alexander) and planning their wedding.

And so the work features four strong women (check) of varying age and race (check) seeking common ground in their values and aspirations at a time when the Supreme Court's 2015 ruling in Obergefell v. Hodges made bans on same-sex marriage unconstitutional (check). It does so with great charm, humor, and nary a soapbox in sight. In true musical theatre fashion, most of the songs pop up organically from the characters' emotions. Yet because Joy and Lou are singers, Rachel was a singer before her preacher husband discouraged it, and Tamara wants to become a singer, many songs are performed as if in concert, which is a clever device.

Still, there is no getting around the fact that Unexpected Joy (book and lyrics by Bill Russell, music by Janet Hood) is a lesser musical than the company's previous selections, Next to Normal and Fun Home. In truth, it reads like the pilot episode of a promising but quickly canceled 1970s TV sitcom. The dialogue is shallow and larded with punchlines and catchphrases in need of a laugh track (look for Tamara's random act of calling her eccentric, sexually fluid, rocker grandmother "Glamma"). The songs are hummable but mostly serve as plot placeholders, and the characters are the spawn of broadly drawn and highly predictable prime-time tropes. One wonders whether Russell and Hood's first stab at the show's title, before their publicist wisely stepped in, was Maude: The Musical.

Director and company founder Lisa Scheps tries hard to rein in some of the sitcom sheen by way of theatrical rather than oversaturated lighting design (Jacqueline Sindelar) and cozy rather than cluttered scenic design (Gary Thornsberry). A makeshift proscenium arch composed of hanging strips of fabric is a subtle reminder that we are in a theatre space and not a television studio.

Also, Scheps casts actors who can showcase the play's more dramatic moments as well as sing up a storm and handle the humor. In fact, Quick's emotional performance in the stone-cold sober song "You Are My Worst Nightmare," which self-righteous Rachel shares with fun-loving Lou, nearly steals the show. This and the other songs are nicely supported by an onstage, all-female, fourpiece band (Jennifer Peacock on keyboard, Mandy Rowden on guitar, Kinseli Baricuatro on bass, and Melodie Zapata on drums), with Kelsey Kimble serving as musical director. But the cast – particularly Sheridan, Mullins, and Alexander – lose a constant tug of war with the often superficial material, at least this early in the production's run. Their handling of the comedy often tips toward wide-eyed overacting that detracts from rather than facilitates the emergence of the musical's unexpected joy. And a less than word-perfect opening Friday night performance impacted both the comedy and drama.

These things will likely improve over time. But despite best efforts and good intentions, Unexpected Joy will still walk like a duck and quack like a duck, which checks no boxes whatsoever.