The artist draws on her experience as a stranger in a strange land without her own wheels, viewing the world through the lens of a car window 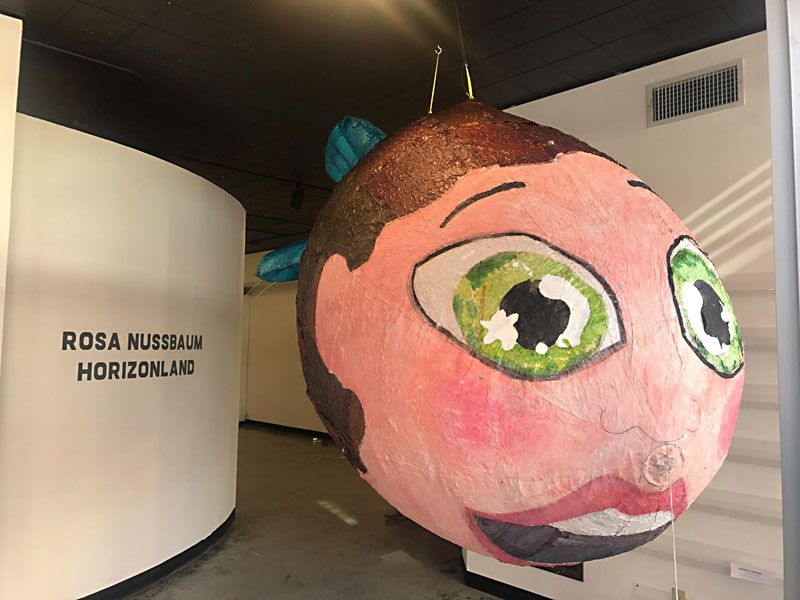 Quick show of hands: Who has craned their neck out of a car window to get a full view of something they were cruising past but couldn't see completely through the windshield?

Another show of hands: Who has taken a guest from out of town/state/country to see fave local landmarks and primed the pump for their appreciation by labeling them with gushy adjectives – say, "incredible" or "awesome"?

Those of you with hands up should relate to Rosa Nussbaum's point of view in this solo exhibit. When this German-born English artist moved to Austin to obtain a master's degree from the University of Texas, she was not only a stranger in a strange land, but one without wheels of her own, which meant she was continually being driven about and asked to look at this or get a load of that with the expectation of an admiring response, even if the frustrating frame of the windshield restricted her view. Nussbaum has made her vexing experience the heart of this show by replicating it for us and making satiric commentary on it.

The former involves documented images that, well, you wish you could see better. In the work Horizonland, three slide projectors cycle through photos that look like they were shot from a moving car. Some subjects are too far to be seen well (a teeny water tower), some are awkwardly cropped (a statue with legs out of frame). On my visit, one projector was perpetually out of focus (on purpose?), suggesting the blur of motion that keeps us from seeing something clearly as we zoom by. A recording of Nussbaum accompanies the slides, but it's mostly drowned out by the clatter of the carousels shuffling. The result is a road trip that offers few clues to where you've gone and what you've seen (or at least were supposed to have seen) – as baffling, no doubt, as Nussbaum's own trips were. Agent Wonder (and the days of arbitration) ups that feeling by having the viewer climb into a tall, steel chair to glimpse random images flashing on a postage-stamp screen embedded in a coral-colored mound of Play-Doh-like goo as a barely audible story about a government agent on some mission plays in one ear.

My kinship with the artist was strongest, though, in works where she was more overtly comical. In WOW (that's amazing), the idea of being expected to react to every roadside attraction with gobsmacked wonder took the form of a floating blimp bearing a cartoon representation of Nussbaum's face and her helium-enhanced voice cooing, "Ooooh! Aaahhh! Wow! That's a-maz-ing!" It's amusing enough hovering in the lobby of Women & Their Work, but it's funnier still in a video of the artist leading the blimp around the Capitol, where it expresses Elmo-pitched awe at the home of the Texas Lege. It pointedly nails our desire to see – and have others see – everything around us as a Wonder of the World.

An alternate take on what we see around us is the tapestry The Natural Bridge, a surreal landscape in which an interchange of freeway overpasses soars by a colossal severed leg, a flock of flying chicken carcasses, and a stand of enormous phalluses – a few gripped by Paul Bunyan-sized hands – spewing sperm into the sky. It's our appetites and desires manifested in the world outside our cars, a cartoon vision given a medieval gloss.

Even more cartoony is Car, a soft sculpture of an auto almost as big as a VW Bug, with arms sticking out of the windows and a giraffelike head poking out of the roof. At first, it may seem to be just a goofy dig at American car culture, but Car projects a melancholy, defeated air. In videos, we see Nussbaum actually wearing it, with only her feet visible as she's swallowed in its unwieldiness, its unremitting slump. It's as pitiful as it is comic. In one video, she attempts to explain her process, and her voice is that of an outsider, uneasy and insecure. In another, she shuffles silently through the drive-through lane of an In-N-Out Burger and the parking lot of a convenience store. They're surprisingly tender moments – a car that knows it's out of place, just looking for a place it can park and call home.