A satirical look at what lies ahead for humanity, as the SpaceX founder might envision it 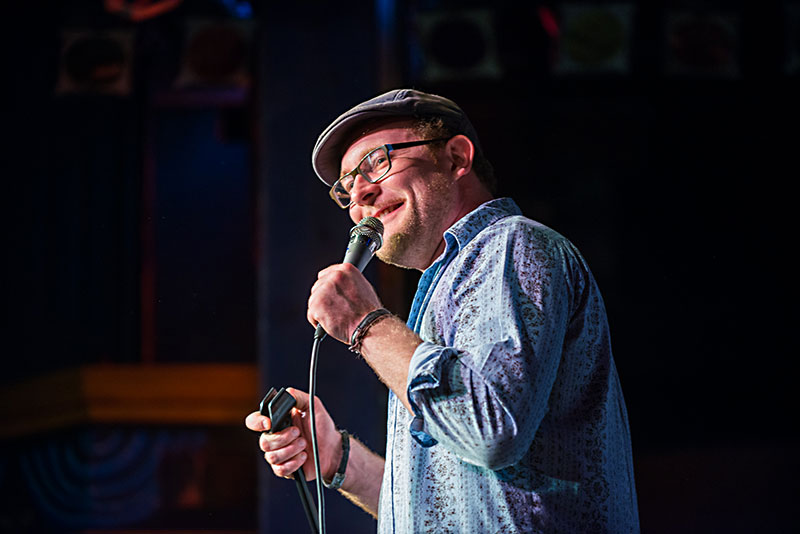 Ideas. Innovation. Inspiration. That's what you come to South by Southwest for, right? And who better to provide all three than the founder of Tesla Motors and SpaceX? I mean, that's what Elon Musk was tossing out during his appearance at SXSW 2018, yes?

Maybe, but when the Mars-minded magnate returns to the conference this year, those qualities may be in short supply. Or, more accurately, what's there of them may well come across as laughable. That's because this Elon Musk won't be that Elon Musk. No, the person presenting the keynote address "Elon Musk: The Frightening and Awful Future of Humanity" will be SXSW stalwart and man of 1,000 faces James Adomian, and any laughs that come out of his speech will be ones he targeted like his subject does the Red Planet.

Musk is just one of many cultural figures whose skin Adomian has climbed into for comic effect. He's likely best known for his impersonation of vinegary Vermonter Bernie Sanders, who sparred with Anthony Atamanuik's Donald Trump throughout the 2016 presidential election cycle (and who scored big at last year's South By with his "Bernie Sanders Town Hall"), but over the years Adomian has covered more than two dozen politicos, celebs, and cranks – everyone from Vincent Price to Jesse Ventura to Sebastian Gorka to Alex Jones. His Musk made a brief appearance at SXSW 2018 and shortly thereafter popped up on the Earwolf podcast Chapo Trap House, where he revealed that it wasn't a dummy sitting in the Tesla he shot into space on a Falcon Heavy rocket: It was Melinda Gates. He continued to appear onstage and in podcasts throughout the year and proved so definitive that Adomian even provided the voice for the audio version of the Elon Musk parody book Welcome to the Future Which Is Mine, written by The Onion founder Scott Dikkers.

Who knows what other mind-blowing hyperprojects this genius will unveil at his keynote? Drilling a Chevy Volt into the center of the Earth? Building a cross-country subway system for billionaires that will take them from Beverly Hills to the East Side of New York in two minutes? Shooting a bitcoin at Jupiter just to see what will happen? No doubt it will be something we less visionary types could never imagine. Just keep in mind this Elon Musk's motto: "Ad astra per sanguinem"; "To the stars through blood"!

A version of this article appeared in print on March 8, 2019 with the headline: Future Schtick