This dance, performed to Steve Reich's Drumming in its entirety, had rhythms moving the dancers and moving through them 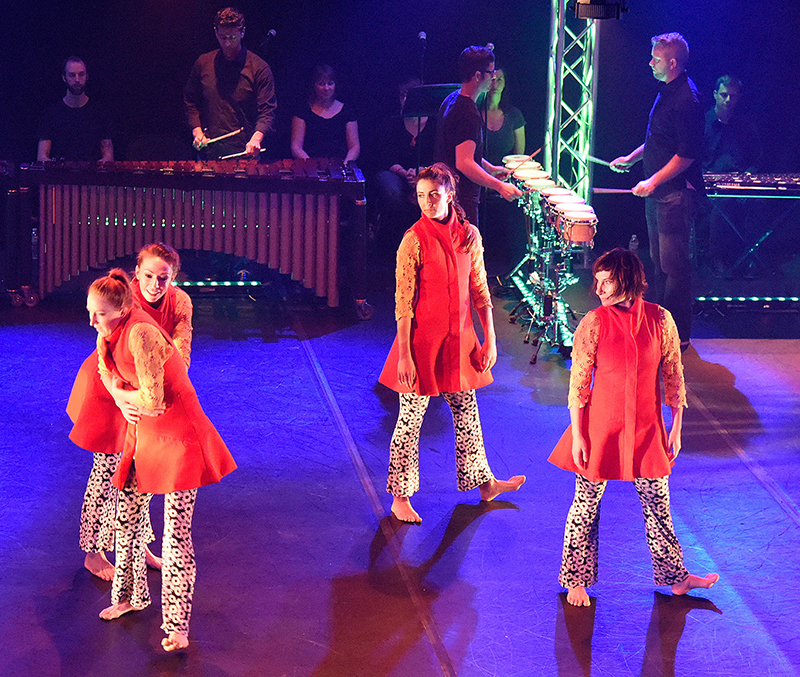 
I've seen perhaps a dozen dances set to recorded excerpts of Steve Reich's Drumming, but until Kathy Dunn Hamrick Dance Company's More or Less, with choreography by Hamrick and Drumming performed live by line upon line percussion (the trio was fleshed out by nine guest musicians), I hadn't heard the piece performed live in its entirety. In a world that is increasingly a sea of extracts, wholes are more significant and wondrous than ever. Intactness is a miracle. Cover-to-cover is a revelation.

Reich's Drumming is an indisputable argument for the unabridged. Rhythms are layered with distinct groups of instruments: bongos played with sticks, marimbas underscored with women's voices, glockenspiels accompanied by whistling and a piccolo, and the whole otherworldly ensemble. Each of the four sections begins simply and builds as notes are added, old rhythms fading into the background as new ones surface – a progression that is unnerving in life but thrilling in music. Hamrick's expert small-group morphing illuminated in movement the music's diametric actions: substitute and replace, collect and diffuse, bring to front and send to back. As the nine dancers shape-shifted and kaleidoscoped, the rhythms drove them to move but also moved through them, suggesting that slow movement to a fast beat is less a juxtaposition than it is attendance to the microscopic rhythms within and around us.

Hamrick has an enviable ensemble, perhaps partly because she's so egalitarian. Without making the work seem like a showcase, she gave each of her dancers a place in the sun, whether in a revelatory pairing, like that of Mariclaire Gamble and D. Poet Powell, both wonderfully lanky thrashers who stand out in crowds, or in a solo section, such as the one that allowed us to focus on cool but quick-to-fire Alyson Dolan, her focus directed neither inward nor outward but toward the same intangible place as the sound.

Hamrick's dancers are adept at playfulness, too, which was moderate but never far away in More or Less. Reich composed Drumming in 1970-71, a time period I happen to be particularly interested in because that's when my house was built. This was a time when people laid vinyl floor tiles embossed with reptile-skin patterns, when pass-throughs hid the work of kitchens, when husbands hung clumsy, oversized windowboxes for their wives' geraniums. Hamrick's costumes – including geranium-red funnel-necked dresses and daffodil-colored crocheted tops – and Stephen Pruitt's unabashed lighting, shed in red, yellow, blue, and purple from lights affixed to metal towers or dangling by their cords from the ceiling, gave us the period's warmth and embrace of garishness. The dancers smiled at each other and at us, as though from the pages of a vintage sewing-pattern catalog. What does this early Seventies visual sensibility tell us about Drumming, and what does Drumming say about my windowboxes? These questions are fun to entertain, perhaps more so than to answer.

A version of this article appeared in print on May 27, 2016 with the headline: More or Less