In this short works program, the troupe explored the solace and thrills in the company you keep 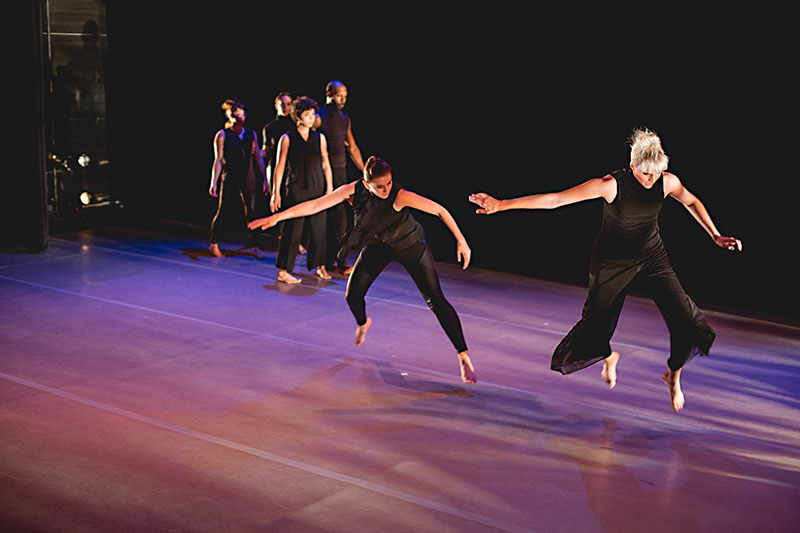 In sharing the program of her company's June concert with other choreographers, Kathy Dunn Hamrick set aloft a tone of generosity. Along with two short works of her own, she presented creations by two of her company dancers, a work by New York-based Project 44 (which she'd previously brought to Austin for last years's Austin Dance Festival), and even a work by longtime lighting designer Stephen Pruitt. The concert's title, Company, seemed cheeky in its simplicity until its double meaning hit: Hamrick's company, with long-tenured dancers and a regular season schedule, defines, perhaps more than any other modern dance group in Austin, the term "dance company," but the company had invited company.

Hamrick's dances, the bookends of the program, were packed with vivid, human choreography and driven by a keen point of view. The first, the sextet "Ones and Twos," began in silence. After a few minutes, the first piercing, familiar notes of Bach's Toccata and Fugue in D Minor came across as tongue-in-cheek, but as the piece progressed, the dancers, agile and adept, morphed into symbiosis with the music, fuguing and swirling as though tossed around by the air shooting through the organ's pipes. Despite this music's minor key, after the first threatening minutes, you might hear a sort of persevering, determined joy. In exquisite relationships with each other and the music, the dancers of "Ones and Twos" showed jubilance persevering along with the ever present sinister.

Next came Project 44, an all-male company, in director Gierre J. Godley's "John D." Who was John D.? Three lithe men seemed to mourn, with backbends and pensive plaints, and to support each other with sensitive partnering in their shared trials, all to compositions of driving and pizzicato strings by Ezio Bosso and Milko Lazar. Godley's mission, according to a program note, is to thwart "preconceived notions about masculinity." It happened that I saw the performance on the day of Anthony Bourdain's death by suicide. As the dancers somersaulted and raised their hips in vulnerable bridges, circling the center stage mark as though it were a demon, I thought of Bourdain and the vulnerabilities within us all that have nothing to do with masculinity or femininity.

The subsequent works were lighter. "Data," by KDHDC dancer Lisa Anne Kobdish, was a cute, clever daydream about robots learning to be human, with the cast of six jumpsuited dancers led by the charming Mariclaire Glaeser, her curious eyes peeking up through her platinum blond bangs. "I'd Like to Solve the Puzzle," by company dancer Alyson Dolan in collaboration with dancer Jessica Boone, was more abstract, with Dolan and Boone in shiny gold rompers designed by Grace Grant – one with a V-front, the other with a V-back. To music by Drew Silverman, they obsessed over a gesture-focused movement series and fell in and out of sync. In "Oxford," by Pruitt in collaboration with dancers Cara Cook, Kobdish, and D. Poet Powell, the dancers' button-up shirts – sometimes buttoned correctly, sometimes not – were symbolic of social presentation and unease.

The final work on the program was the funniest. Hamrick's "Pièce de Résistance" put four of her female dancers in flowered frocks under sunny lights, serially and joyfully disobeying the amplified voice that told them to stand still, avoid touching, keep their feet on the floor, and so on. Whole essays might be written on the idea evoked by this sweet dance – that the body is a site of resistance, which makes it important to pay attention to what dance artists are doing. But the quartet launched into a fun, purposely awkward adagio to the "Méditation" from Thaïs, and no one felt like writing an essay anymore. "Don't do it," warned the voice several times, not specifying the final prohibited action. The dancers beamed at the audience, and two of them gave the other two giant smooches on their cheeks. 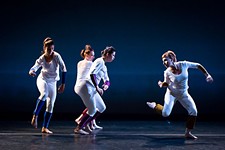 Kathy Dunn Hamrick Dance Company’s Glacier
As an elegy to the ice, this dance aestheticized doom but left us plenty of edge