In the percussion trio's concert of new works, four pieces took very different forms, but all resolved in a comparable calm 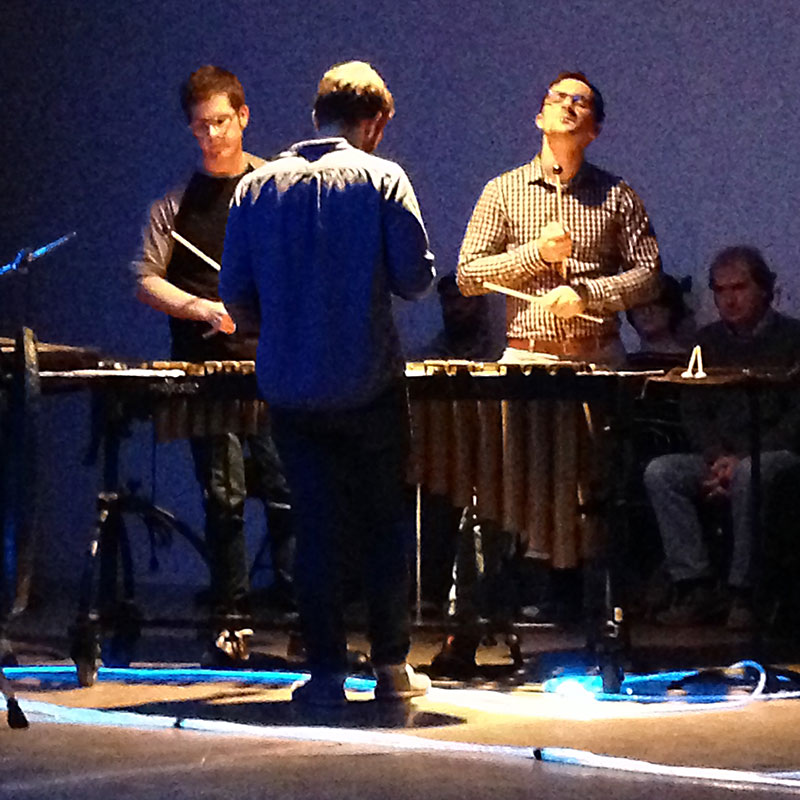 Even by the unconventional standards of line upon line percussion, the first piece in first – the second concert of the trio's fourth season – was ... surprising. Different. Unusual. I mean, musicians Adam Bedell, Cullen Faulk, and Matthew Teodori have previously engaged in such offbeat exercises as performing in a creekbed under a bridge, using bicycle parts as instruments, making music with water, but here the three had clipped themselves to ropes that rose to the top of a concrete column in the Big Medium Gallery. And they weren't just moving their arms the way they do in most of the pieces they perform; they were moving their whole bodies, walking through the space winding the ropes around themselves and making sounds – slapping their chests, clapping their hands in front of their open mouths, stamping their feet, softly repeating a few set phrases – as they reached parts of the ropes with specially placed knots. Composer Claudia Molitor had created "a tactile score," and the line upon line-men were reading it with their fingers, the knots telling them what sounds to make. Program notes likened these living, breathing, mobile percussion instruments to spiders spinning the score through space and entangling one another in their respective sounds, but with the hushed quality of the sounds, the long stretches of silence spun out between them, the dimness of the high-ceilinged room with Natalie George's ropes of light winding across the floor like bioluminescent trails, the performers stepping gingerly through the space, and, of course, the ropes connecting them, the trio also suggested a team of spelunkers venturing through a vast unexplored cavern. The sounds, small and spread out, became a way for them to navigate the great unknown quietude around them, a tool for mapping the expanse. After a while, the silence seemed to acquire its own physical presence and rhythm to which the delicate sounds worked as counterpoint. And somewhere in it, you could imagine the shade of John Cage soundlessly applauding these intrepid explorers.

The notion of Teodori, Faulk, and Bedell as explorers isn't exactly original – their "Best of Austin" Critics Pick in 2012 called them "explorers in the realm of rhythm and aural texture, constantly searching for new and challenging music they can play" – but it bears repeating after a program like first, which featured four new works, every one of them experimental and boundary-pushing in some aspect. In addition to Molitor's tactile composition Entangled, Brett Kroening's alchemy test used an array of traditional and nontraditional instruments (a vibraphone, a snare drum, a cymbal, crystal glasses, coins) in an aural analog of the medieval process of transmutation; Pablo Vergara's Engraving on bronze called for the tips of drumsticks to be dragged across cymbals like needles on a vinyl record; and a new work by Southwestern University's Jason Hoogerhyde (getting an unofficial pre-premiere at first) positioned all three line upon line members around a single vibraphone. Rarely did the works resemble music in the conventional sense. Bows drawn along the edge of vibraphone keys created a sharp metallic keening, eerie yet compelling, and those drumstick tips on cymbals made long, unearthly screeching that might have been a door opening to the ancient tomb of some gruesome, ghastly beast. And the closest some of them came to recognizable rhythms was the erratic cadences of bebop. Still, even at their harshest and most bizarre, these pieces held the fascination of discovery – catching a sound previously unheard, finding out where a new idea would take you.

Curiously, with all of the works in first, the strange new ideas took you to a settled, almost serene place. The competing sounds of alchemy test came across almost like a family squabble, noisy and insistent. Then with his wet finger circling the edge of a crystal glass, Teodori summoned a soothing bell-like tone, and a coin spun on a suspended cymbal made a rattle so soft it sounded like sand being poured on a table. Likewise with Engraving on bronze, where those grating screeches of drumsticks on cymbals gave way to a mellowing gong. There will be periods when tension, discord, and clamor may envelop us, even assault us, the four compositions seemed to agree, but in time there will come a resolution that signals peace. A notion worth remembering in days like these. Thanks, line upon line.

Big Medium at Canopy, 916 Springdale, Bldg. 2
Feb. 3
A version of this article appeared in print on February 10, 2017 with the headline: Happy Endings

More or Less
This dance, performed to Steve Reich's Drumming in its entirety, had rhythms moving the dancers and moving through them