line upon line percussion's The city wears a slouch hat 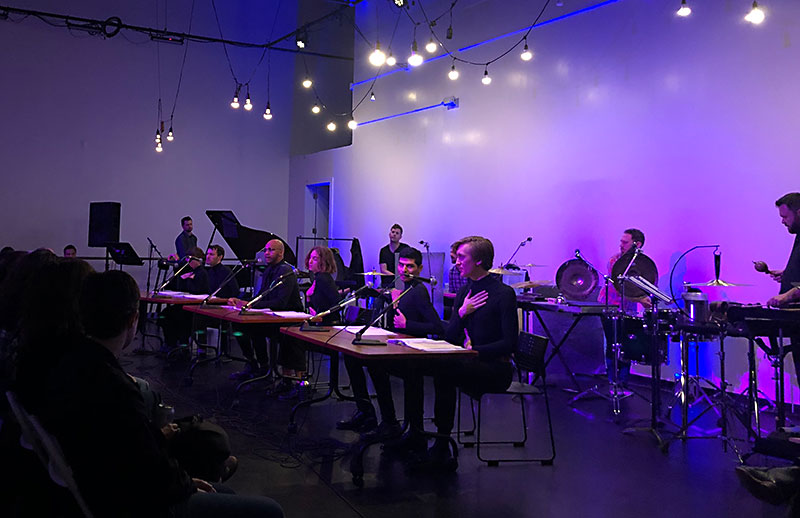 Imagine yourself on the streets of an American metropolis in the months after Pearl Harbor. The night is wet, and in trying to stay out of the rain, you duck under an awning, then into a nightclub, then into an apartment that isn't yours but where you heard the phone ring and decided to answer it. You're in and out of the rain, but no matter where you are, there are people talking – some deep in their own conversations that you overhear, some speaking directly to you: a panhandler, a mugger, some joe just listening to the boats, some dame claiming she's horribly scarred, a trio of gun-toting goons. And under every exchange, every chat, is another voice: the city's. This urban behemoth is talking, too, carrying on an incessant monologue of clangs, rattles, tick-tocks, thumps, drips, whistles, and horns.

This is the voluble, cacophonous world of The city wears a slouch hat, a remarkable collaboration by composer John Cage and poet Kenneth Patchen for a CBS radio series, Columbia Workshop, in 1942. Given free rein by the program to experiment, the duo took it and ran. Patchen's text, which initially feels like it's heading down the mean streets of a period crime drama – "I'd as soon plug you as breathe," sneers one hood – instead veers into back alleys of surrealism, metaphysics, and Elizabethan poetry. Cage's score has no conventional melodies or arrangements but is instead a collage of sounds made with a wild array of percussion instruments, noisemakers, and recordings of foghorns, planes, waves, and the like. The city wears a slouch hat was daring for mainstream radio of the day – perhaps too daring. For the 29-year-old Cage, it was the beginning and end of his radio career.

But the very qualities that sunk this aural experiment 76 years ago made it ideal material for the sonic daredevils of line upon line percussion to excavate and revive now, and to use in their first collaboration with the Rude Mechs, no strangers themselves to taking artistic risks. Line upon line's Adam Bedell, Cullen Faulk, and Matthew Teodori revel in the making of sounds – the stranger and more challenging, the better – and excel at transmuting what might first strike our ear as random noises into music. In this second concert of their sixth season, the three managed a new alchemical trick. Aided by guest percussionists Thad Anderson, Thomas Burritt, and John Lane, they took Cage's miscellany of metropolitan noises and shaped it into a character. They made the city a living entity, ever-present yet remote, observing humanity but not sharing what it knows, only commenting in its mysterious language of shimmering cymbals, clanking cans, rattling gongs, squealing whistles, and ticking metronomes. Through the musicians and their silent partner, lighting designer Natalie George, we felt the weight of the city on "the Voice" – the anonymous figure whose odyssey we followed – and on the characters he met.

The skill with which the Rudes gave voice to these figures and Patchen's text meshed smoothly with the percussionists' evocative treatment of Cage's score. Seated at tables with one microphone for each of them, the six actors conjured a lineup of sad sacks, working stiffs, and toughs, deftly sliding in and out of character. ("Deft" is also the word for Alexandra Bassiakou Shaw's direction, which modulated the vocal work and used simple movements – turned heads, actors exiting – to add dramatic impact.) But throughout the changing personae, one constant was the actors' savoring of the tasty tang of the script's Forties street slang: "Stick 'em up, Jack," "hey, bub," "cripes," "the dirty rat." Kriston Woodreaux held this shifting world together even as his character, the Voice, morphed from Everyman to mystery man to man-in-existential-crisis; his mellifluous voice grounded the Voice, whether he was gabbing with a stranger about "them creameries near Mellyberg" or reciting Christopher Marlowe's "The Passionate Shepherd to His Love." And when the Voice made his ultimate plea for "more love in the world, more understanding," extending to us his hand in friendship, it came across as heartfelt, genuine. It ended the strange noise of The city wears a slouch hat on an unexpected note of harmony.

The city wears a slouch hat

More or Less
This dance, performed to Steve Reich's Drumming in its entirety, had rhythms moving the dancers and moving through them