1) THE STRANGE UNDOING OF PRUDENCIA HART (National Theatre of Scotland/Texas Performing Arts) On a Bass Concert Hall stage transmuted into a Scottish pub, five exuberant performers spun a lively tall tale of a lovelorn academic getting trapped in Lucifer's B&B. The devilishly clever script and playful theatricality that made motorbikes of audience members and blizzards from shredded bar napkins were as intoxicating as a shot of Scotch – and gave me the warmest glow I felt in the theatre all year.

2) WAR HORSE (National Theatre of Great Britain/Texas Performing Arts) The saga of equine heroism and an unshakable bond between boy and horse, with animals played by mesmerizingly lifelike, life-sized puppets, lost none of its wonder or sentimental power in this touring show. It reared enchantingly in the light and galloped away with my heart.

3) EL RUMOR DEL INCENDIO (Lagaritas Tiradas del Sol/Fusebox Festival) This whirlwind history of revolutionary activities in Mexico in the Sixties and Seventies was a challenge to keep up with, but it intertwined the political and the personal with such passion and such an imaginative use of theatrical devices that it kept me spellbound.

4) COCK (Theatre En Bloc) A simple chalk circle marked the ring in which a pitifully indecisive man and the two lovers he was torn between battled like boxers. We never saw a punch thrown, but Derek Kolluri's incisive direction and the taut ensemble let us see – and feel – the impact of each psychological and emotional blow.

5) A MIDSUMMER NIGHT'S DREAM (Texas State University Dept. of Theatre & Dance) It's been many a midsummer night since I've seen this oft-staged play so fresh and rich in meaning. Actors found the music and matter in well-worn lines and depth in too-familiar characters, thanks to the insightful direction of Charles Ney, who also made this comic love fest a valentine to theatre.

6) CHICAGO (Half & Half Productions) An intoxicating rendition of Kander & Ebb's Jazz Age cocktail, made all the headier for being staged in an actual gin joint. An exuberant cast led by a dynamic Leslie Hollingsworth, giving Velma Kelly her all, and outstanding musical direction by John VanderGheynst made this a show I wanted another round of.

8) MAID MARIAN IN A STOLEN CAR (Zach Theatre) Jaston Williams' latest self-penned solo show paid tender tribute to the theatre in all its magic and madness, its ability to find truth in fiction and touch lives across time and culture in ways that by all rights it shouldn't, and its ability to pull under one roof an army of misfits and neurotics.

9) IA ENSTERA'S SETS I saw just two-thirds of the 14 sets that Austin's Valkyrie of Scenic Design created for local stages in 2014, but I feel safe in saying that she still works wonders – that moat of crumpled paper around the stage in We Play Chekhov? that full backyard on Hyde Park Theatre's stage in Detroit? – and the magical spaces she crafts for artists to play in make every production better.

11) STONE SOUP (Summer Stock Austin) How often do you leave a new work not just lifted up by the material but genuinely hopeful? This original musical by Allen Robertson and Damon Brown served a familiar meal of lessons about community, but did it sauced with such wit, catchy music, and contagious good will that it left me unusually heartened.

12) THE ORCHID FLOTILLA (Glass Half Full Theatre) Caroline Reck, crouched in a shopping cart, alone and adrift on unknown seas, proved how much can be done with little. Her grace, her wistfulness, her silence, her sense of play, left both a joyful ache and an admiration for her artistry in my heart.

13) JASON PHELPS IN FEAST OF MY HEART (Jason Phelps & Co.) A splendid showcase for this performer who inhabits characters with such fire and grace. His simplest movements mesmerized and informed the drama in the eight shorts, most hauntingly in C. Denby Swanson's eerie "The Theory of Substitution."

The Gospel at Colonus (Zach Theatre) 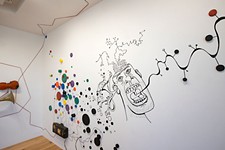 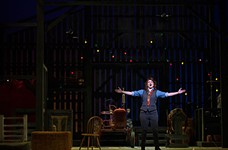