Dude ranch antics make this reimagining of Strauss too busy, but when the music takes center stage, it’s gorgeous 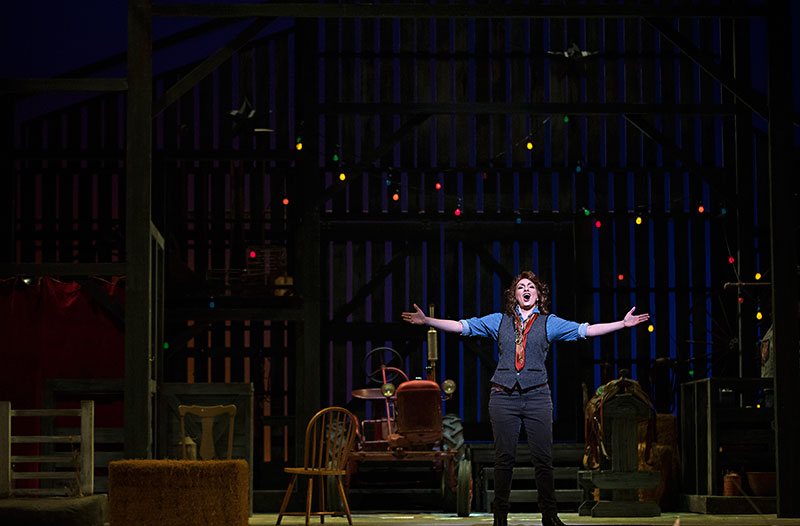 The desire to liberate operas from their traditional settings to modern-day milieus can yield powerful and intriguing new productions from which we experience the music, story, and characters, perhaps even our world, with a refreshed clarity. The University of Texas Butler Opera Center's fall production of Mozart's Così Fan Tutte (set in the world of contemporary high finance) was such a bold reimagining. Austin Opera's presentation of the Richard Strauss classic Ariadne auf Naxos is the latest.

As first produced at the Glimmerglass Festival, this reimagining of Strauss and librettist Hugo von Hofmannsthal's 1916 work swapped 18th century Vienna for a rural music festival in 21st century upstate New York. A rich man has paid for post-dinner entertainment for his guests: a new opera, Ariadne auf Naxos, the debut work of a high-strung young Composer (soprano Aleks Romano), and an Italian comedy, performed by a slovenly rock-&-rollin' troupe, led by the promiscuous Zerbinetta (soprano Jeni Houser). The tragedians and comedians do not mix well, though Composer and Zerbinetta connect. The situation is made worse when, due to unexpected time constraints, the host demands that the opera and comedy be performed simultaneously. Following the intermission, the audience is treated to the results of this impromptu mélange.

Kelley Rourke, who modernized the libretto, has discovered plenty of snappy parallels in her updated translation, but in re-relocating her relocation to a Texas dude ranch for Austin Opera's version, she may have baled a hayfield too far. Strauss' opera walks a fine line between parody and seriousness, musically and conceptually, and despite its big heart, this production doesn't hold the line.

In Part One, as the various artists and their handlers deal with one another and the dude ranch hierarchy (full disclosure: Chronicle Arts Editor Robert Faires plays the Manager of the Ranch), the result is a visual cacophony that, although meticulously staged by Jennifer Williams, overwhelms. Where to look? Which character to follow? What to listen to? Strauss' music gets buried under antic activity and a sense that Rourke was cramming English lyrics into once melodious measures.

This does not diminish the efforts of the singers who, when called upon, conquer Strauss' daunting musical challenges. Romano and the grand Alexandra LoBianco (the Prima Donna in Part One/Ariadne in Part Two) have resonant, powerful voices, and Houser performs vocal acrobatics singing Zerbinetta's aria of romantic adventure, "O, great princess!" Jonathan Burton dominates as the Tenor/Bacchus, and local David Small's lush baritone adds gravitas to the Agent dealing with so many divas.

On opening night, a longtime operagoer was overheard musing that he attends these performances for Maestro Richard Buckley, Austin Opera's artistic director and principal conductor. Buckley certainly brings the emotive, charming best out of his orchestra, and in Part Two – unburdened by the antic distractions of Part One – the music takes center stage. Among the evening's most heartfelt moments is the Composer sitting on her piano bench downstage watching Buckley conduct the prelude to Part Two, simply listening to some gorgeous music.

Ultimately, love conquers all. As the princess Ariadne and the god Bacchus leave the island of Naxos, the Composer and Zerbinetta embrace, embarking on their own newfound love. The Prima Donna turns, approves, and fireworks explode in the Texas sky.

Editor's note: The day this review was published, Richard Buckley's contract with Austin Opera was terminated. The remaining performances were conducted by Robert Mollicone.