Top 10 Things to Happen to Classical Music in 2014

The year saw Austin go big in classical with big-name artists and competitions coming to town, and big crowds, too 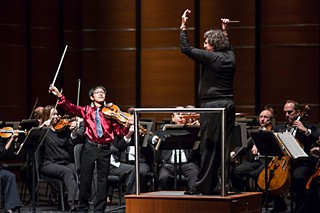 Top 10 Things to Happen to Classical Music in 2014

1) THE MENUHIN COMPETITION Austin got to host this massive international violin competition the first time it was held in the U.S.

2) THE CLEVELAND ORCHESTRA CAME TO TOWN A bit of a cheat listing this separately since it was part of the Menuhin festivities, but that Tchaikovsky was unreal.

4) THE AWESOME TURNOUT FOR FAST FORWARD AUSTIN 2014 This all-day contemporary music marathon was teeming with enthusiasts of minimalistic sound.

5) AUSTIN OPERA SCRAPPED 'LYRIC' FROM ITS NAME The company took off that stuffy period wig and is letting its hair down.

6) LINE UPON LINE PERCUSSION'S FIRST INTERNATIONAL TOUR Though it means we see less of them in Austin, we're happy this fabulous local percussion trio is taking off.

8) SOUNDSPACE AT THE BLANTON EXPANDS TO THREE SHOWS A YEAR When it comes to this blockbuster event, the more sound the better.

10) CHANGING TIDES AT KMFA Austin's classical radio station hired some new blood (John Clare and Chris Johnson) and with that are taking bold steps with its programming.