How do you follow a monumental endeavor such as The Trash Project? How about with something small?

After devoting some five years of her life to staging a work that involved tons of mechanical machinery, scores of city employees, and a massive municipal bureaucracy, choreographer Allison Orr is scaling things back a bit. OK, a lot.

Her next dance will focus on an individual, someone whose movements are familiar to many but, like most of the subjects Orr has set her choreographic sights on, not generally considered dance. Her subject will be Austin Symphony Orchestra conductor Peter Bay.

On the Forklift Danceworks blog, company Artistic Director Orr states that she conceived the piece two years ago after watching Bay for many years. "He has always struck me first and foremost as a dancer," she writes. "I love his light movement quality, the way he attacks the space, and the variety with which he uses space and energy. He is a complete and total musician who does not make one single sound. His job is certainly not easy. It requires many, many skills. He must have: serene wisdom, a fabulous memory, a commanding presence, vast experience, a remarkable power of projection, a strong hand, and perfect pitch. Historically, people in his position have not always been well-liked, for they have been called: tyrants, dictators, autocrats, and superstars. Thousands have tried, perhaps more have failed. There are very few like him, and he carries an immense amount of responsibility.

"Over the next nine months, I will be watching him, interviewing him, shadowing him, talking to other people about him, learning all I can about him and his job – basically stalking him." Orr doesn't know yet what form the dance will take, only that it will feature music directed and composed by Graham Reynolds and will take place in July 2012 in the Rollins Studio Theatre at the Long Center, 701 W. Riverside. 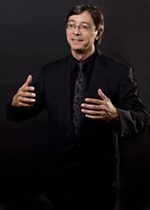