The symphony conductor: Though a highly revered and magical position to many, much of the time, it's also an isolated one – something Austin Symphony Orchestra maestro Peter Bay knows all too well. "I enjoy what I do as a conductor," he says, "but a lot of it is very solitary. I sit either at the keyboard with the music, or at my desk. It's extremely stimulating for me, but once in a while, I like to play around with people."

These days, Bay is doing just that through two collaborative endeavors that exist at opposite ends of his comfort spectrum. The first is with Craig Hella Johnson, fellow conductor and artistic director of the professional choral ensemble Conspirare. On May 4 and 5, symphony and chorus join forces to perform works by three eminent composers of the mid 20th century: Bernstein, Stravinsky, and Stokowski. As with many collaborations in the arts, the ideas for this one percolated over a significant period of time, though in a process less formal than some might imagine.

"I think the conversations that I had with Craig about this program probably took place about two or three years ago," Bay recalls. "The fact that I have such great admiration for him as a musician and that the orchestra adores working with him made this a no-brainer. So it was just a matter of choosing what pieces we were going to do.

"I was really headstrong about doing [Stravinsky's Symphony of Psalms]. It's a piece I've loved for a long, long time, and I've never had a chance to conduct it until now. When I mentioned psalms, [Bernstein's Chichester Psalms] came up, too. And then [Craig] said that he'd not conducted it, and it was a piece that he loved. So there we had two cornerstones for this program. Then the question came, 'Well, what do we pair with it?' That took longer to figure out. Somehow, Bach and Stravinsky always make good pairings for me, and the time frame for [Stokowski's arrangements of the Bach pieces] was perfect for this program, so I suggested them to him. And he said, 'It's amazing that you would suggest that, because I've always loved these over-the-top arrangements for orchestra.' So, you know, it all fit together beautifully."

For Bay, though, collaborations are not focused solely on the performances themselves. He also views them as opportunities for artistic development within his own ensemble. "The orchestra always grows when it works with vocalists, whether it's with solo vocalists or massed ones like a chorus," he says, "because obviously all music grows from the voice. I love for the orchestra to work with singers to learn how best to breathe together – [symphonic] music should sing."

The maestro's deep conviction in this philosophy is evidenced in his sharing of the concert's conducting responsibilities with Johnson: "I insisted that [Craig share the podium] with me, because – especially for a choral director – he or she will spend all of their time preparing, and then the [symphony] conductor comes in and takes over the show at the very last minute, which can be very unsatisfying, I would think."

Since Bay is accustomed to working with other conductors, the Conspirare/ASO concert falls easily within his comfort zone as collaborative processes go. But in July, Bay will take a completely different role center stage – and this time, he'll be facing the audience.

The second collaboration is with choreographer Allison Orr, artistic director of Forklift Danceworks, who is translating the maestro's conducting movements into a work unto itself. When Orr made initial contact with Bay, "she basically gave me an overview of what Forklift is all about," he says. "She likes using everyday people and their motions in a choreographic way, and she was fascinated by the arm motions of a conductor. Would I be interested in collaborating with her on such a thing? And I said, 'Well, sure.'

"I'd say our first four meetings together were, on average, one to two hours each. Basically, she interviewed me. She wanted to know specifics of what I do with my hands, but more interesting for her was what I do with my face. What an audience doesn't see is [the conductor's] facial communications, and these aren't things that are preplanned. It's the conductor reacting to the music and trying to impart the feeling of what I think this music is trying to communicate. And she wanted to know the nuts and bolts of it, too. So we've talked about the nuts and bolts, and also about the philosophical aspects of conducting and making music.

"After we had the interviews, she asked me to make a list of 10 of my favorite pieces. One of [them] was Beethoven's Second Symphony. She listened to the piece, and we focused on the 'Scherzo,' the third movement. And she filmed me conducting it – in this case, to a recording. She isolated certain hand motions I used that fascinated her or that she thought would look interesting in a choreographic sense. I did something where I swirled my left hand, sort of in a circular motion going away from me, and she loved that, and said, 'Would you try doing that same thing over a period of eight bars, going from left to right?' And we ended up doing that with certain gestures that I do. She isolated certain things and asked if I could do [them] to the right, to the left, up or down, so she [could] create the choreography based on individual hand motions and sort of mold them together."

Orr will set her choreography on Bay himself. He will become the unconventional soloist of her piece, moving to an original score that frequent Forklift collaborator Graham Reynolds has adapted from Beethoven's Second Symphony. Though helming a mass of musicians is nothing new for the conductor, this piece will put him out front in a way he hasn't experienced before, and the move has him feeling a little vulnerable. "There are no dancers," he says. "I am it. This is what's scary to me."

Yet, for all of the scariness that comes with this uncharted territory, the maestro is willing to go out on the proverbial limb for a crucial reason: "I think that the whole point in collaborating – for me, anyway – is to learn something. And I learn so much from people who are musicians, and especially people who are not musicians but are involved in some kind of art – whether it's visual art or performing art. And I feel that if I learn something, everyone who is willing to go along for the ride is going to learn something, too."

Bay places much of the credit for his willingness to explore creative partnerships on the city's innovative and excited spirit. "In Austin, there are so many possibilities for collaboration. Not to [collaborate] is basically silly. We have so many dance companies, theatre companies, chamber music [groups], and orchestral things going on, and all of it is fun. We can do that in a town that has so much to offer."

Next week, Peter Bay and I are meeting for coffee. The agenda? "Discuss potential collaboration."

The Austin Symphony Orchestra and Conspirare will perform together Friday and Saturday, May 4 & 5, 8pm, in Dell Hall at the Long Center, 701 W. Riverside. For more information, visit www.austinsymphony.org. 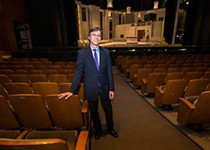 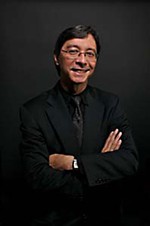