Forklift Danceworks Goes "On the Job" With Essential Workers Many performing arts companies want their audiences to know how the people who have worked on their shows are doing under the stay-at-home order, and Forklift Danceworks is no exception. But unlike other companies, which are sharing news about artists, musicians, and technicians who aren't working, Forklift is sharing news about its collaborators who are – though they're not doing what you might expect.

The people you hear from in the new audio series "On the Job" were in Forklift productions such as The Trash Project and PowerUP – shows built around the movements of city employees going about their daily tasks – and they were in those shows because they were the city employees performing those tasks. By coordinating their actions and presenting them under lights, Forklift Artistic Director Allison Orr and Associate Artistic Director Krissie Marty revealed the poetry in these workers' movements, helping audiences to see what they do as dance. More significantly, they got audiences to understand how important the people who work in Austin Energy, Austin Resource Recovery, and other city departments are to everyone who lives here.

While those Forklift shows may have been performed years ago, many of the employees who appeared in them are still working for the city, and now, during the pandemic, their duties are more than important; they're essential – officially. With that in mind, Orr and Marty wanted to check in with folks they'd gotten to know and collaborated with in those earlier productions, to learn how they're faring and what's been happening with their jobs in this COVID-19 world. "We're all having to change how we work now," says Marty. "So I was really interested in knowing what's different for them." That led the Forklift leaders to think it might also be useful for the public to hear what these workers are going through now. And with the company having temporarily put on hold its big project for 2020 – a series of events and performances celebrating the storied history of baseball at East Austin's Downs Field – Marty suggested, "Let's make this our project."

Though Orr was initially cautious – not wanting to take advantage of these workers' valuable time in the midst of a crisis – she was drawn to the idea. Forklift isn't a traditional company making work with professional dancers in a studio. "Our studio is on the streets," Orr says, "and it helps me see what's going on out there to hear what's going on [with these workers we know]."

Whatever added stresses these city workers are facing in this difficult time, they make it clear over and over in the audio interviews that they care about their jobs and they’re proud of what they do.

Still, she adds, "It took a while to figure this out." While audio has long been integral to Forklift projects, it's always been a supplement to the movement work; this time, it would be the main medium. But the conversations would have to be recorded remotely – a radical shift from the in-person, hands-on way of working that the company favors. Plus, there would still be bureaucracies to navigate, the same ones that Forklift needed approval from when it partnered with city departments on previous projects. This time, "not every institutional partner has been able to say yes," Orr says, but "because we have the trust built" from four successful collaborations now – The Trash Project; PowerUP; The Trees of Govalle; and My Park, My Pool, My City – departments have been more inclined to give Forklift a thumbs-up for this. Fortunately for Orr and Marty, too, "people have been very happy to talk" with them ... again. "We've started joking that once you get involved with us, we don't let you go," says Marty. "You get the Hotel California with Forklift."

Orr and Marty brainstormed a list of people to speak to, people in different city departments and different jobs within their departments ("someone who works in the office, someone who's out in the field," says Orr), as well as people who, not insignificantly, love to talk. (The list also included workers from Forklift projects at universities in North Carolina and Massachusetts.) The two then began calling workers on the list and conducting brief interviews, which were turned over to Forklift team member Clara Pinsky for sound editing. She started posting the audio online on April 17 and has been adding a new installment every three or four days since. The plan is to keep adding interviews throughout the summer.

In their brisk five-minute Q&A sessions, Orr and Marty manage not only to reconnect with these workers, but also to advocate for them by making those of us who benefit from city services aware of the added load employees are shouldering because of the coronavirus shutdown.

From Austin Resource Recovery's Chris Guerrero and Virginia Alexander, we hear that people staying at home are generating as much trash in a week as they do the week after Christmas. The extra loads mean that a truck which usually makes one trip to the dump in a day has to make two. Eight-hour workdays become 10-hour days. And all that time, the sanitation workers have to deal with protective gear and anxieties that weren't part of the job three months ago.

Austin Energy's Jeff Bradford points out that the difference between this crisis and the kind in which the department is most often thought of as "essential" is that Austin Energy is "not in restoration mode" – getting power restored after it's been knocked out – the way it is with a hurricane or an ice storm. During the pandemic, Austin Energy is maintaining power while adhering to social distancing guidelines with both customers and its own staff. And doing that can add strain to the job from the complications it entails.

But whatever added stresses these city workers are facing in this difficult time, they make it clear over and over that they care about their jobs and they're proud of what they do. And they don't just feel that way about themselves. That extends to their fellow employees, who they routinely describe as "good people" and even "some of the best people in the business." And like the folks they're serving through this crisis, they all want their families to be safe.

In all of its portraits of essential workers, "On the Job" performs a service, too, the same one that Forklift's past productions have: to give these city employees a human face and show them as the heroes they are. 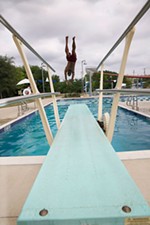 Forklift Danceworks, Allison Orr, Krissie Marty, The Trash Project, PowerUP, The Trees of Govalle, My Park, My Pool, My City