Arts on Real: Theatre under threat

Tweet
print
write a letter
A month ago, Arts on Real was cheerfully celebrating five years of producing and presenting plays, dance, and film on the Eastside. A week ago, however, it looked like the classy warehouse theatre wouldn't be around to see a sixth. Blake Yelavich, the actor/writer/director/producer who built the venue out of an empty Reddy Ice facility (with $50,000 scored as a contestant on Win Ben Stein's Money and The Weakest Link), had sounded the alarm to friends and patrons: He needed to raise $7,500 by the end of April, or Arts on Real would close by the end of May.

What happened, Yelavich says, is that he was told by LWR Family Partnership, which owns the property at 2826 Real, that he had to pay the property taxes that the lease makes him responsible for in one lump sum this year instead of spread over 12 months as he'd been able to do in the five years previously. And that total, $8,800, was due April 30. Not having that kind of scratch just lying around – Yelavich has ever been the thrifty producer, but hey, this is still a small nonprofit theatre we're talking about – he put out the word that unless supporters sent in some cash, the theatre's days were numbered.

The tone of desperation was occasioned, Yelavich says, by the fact that the landlord wasn't open to negotiation or mediation on the matter. In defense of the property owner, an attorney representing LWR Family Partnership has claimed that Yelavich had repeatedly failed to pay rent on time, wrote checks that bounced, and owed back rent. Yelavich doesn't deny having had cash-flow problems that affected rent payments – again, this is a small nonprofit theatre – but says he was assured in March that he was up to date on rent. Whatever the case, Yelavich was still responsible for that $9,000 payment, and with a week until it was due, Yelavich issued his cry for help.

People got the message, and they responded – fans of the theatre, certainly, but also some folks who had never been there, like the member of an East Austin neighborhood association who just liked what Arts on Real represented: an effort to add something to the neighborhood rather than profit off it. Within five days, Yelavich had the money he needed. But then he was informed that he owed several thousand more dollars and that now a total of $15,000 would be due April 30. That put Yelavich in the position of raising another $6,000 in three days.

As of press time, Arts on Real did not have that amount in hand, but attorney Catherine Tabor, who has been offering pro bono legal services to Arts on Real, indicated that potential donors who had not yet made contributions were willing to do so if Arts on Real was assured of an extension of its lease. Tabor obtained a new one-year lease agreement on Wednesday and was hopeful that the full amount owed LWR Family Partnership could be collected by the end of the day.

Although the Wednesday deadline has now passed, Yelavich would no doubt appreciate any support, especially in case he faces any further financial challenges. Donations may be made online at: www.2008donorpage.eventbrite.com. For more information, call 472-2787 or visit www.artsonreal.com.

The Colosseum: There Will Be Oil
Arts on Real goes WWE with six seminaked, well-greased men wrestling for a championship title 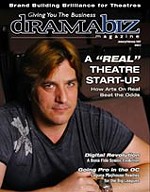 Arts on Real: Secrets to building a successful theatre
Naughty Austin Artistic Director Blake Yelavich spills all about the creation of his theatre, Arts on Real, in his cover-story interview in the trade publication DramaBiz