The Colosseum: There Will Be Oil

All right, I admit it: As a teen, I watched wrestling. Ivan Putski, Mr. Fuji, Chief Jay Strongbow in his headdress doing his rain dance around the ring. I watched it all and, in my naivete, believed that the Chief was a Native American. (Actually, he was Italian.) As an adult, I once watched two somewhat scantily clad women wrestling in oil and have to admit I found it at least as stimulating, if not more so, than watching Andre the Giant throw people around the ring.

That's why The Colosseum, an all-male wrestling show that will be produced at Arts on Real, holds more than a passing interest for me. Originally staged in California by Darkhorse Entertainment and featured on HBO's Real Sex, the version in Austin is being directed – and reimagined – by Blake Yelavich, Arts on Real's producing artistic director. "It was a show that was sent to me," says Yelavich. "The promotional videotape was kind of scary. It was done in the corner of what looks to me like a bar. And while I didn't rewrite the basic content, I did fill in some narrative holes and dialogue. Basically, I restaged it for the feel of a bigger production – tightened it up yet fleshed it out. You meet all of the wrestlers at the very beginning, then the announcer, then the judges. Then the wrestlers wrestle in historically accurate wrestling gear – which is oftentimes next to nothing."

And do they ever wrestle. Over the course of close to a half-dozen matches, six wrestlers, including a California-surfer type, a redneck, and a very big drag queen, compete to face the champion, Zeus, for the title. Says Yelavich, "This show is Pageant [Arts on Real's popular drag beauty contest] all over again: six stereotypes working their way up the pyramid, with the audience voting to determine who vies for the championship."

Since he didn't know much about wrestling, Yelavich recruited Houston-based Rip Clark, a sometime wrestler, underwear model, and expert in martial arts, both to choreograph the show and to star as Zeus. "I met Blake through some friends," says Clark, "and we were talking, and he saw the shape I have. I'm not a big, giant steroid guy; I weigh 175, but I'm really, really cut. He told me about the vision he had for this play, and he showed me the script, and I thought, 'Oh my God; I have to do this.' Blake's a genius. I'd seen the one on HBO, and it was just something crazy and racy, but the Arts on Real show is awesome. It's basically the history of wrestling, from Roman gladiator days to modern times." And as to the oil wrestling, Clark says, "It's mandatory."

According to Yelavich, they've presold more tickets for this extravaganza than for any show in Arts on Real's history, and that's saying a lot, given that the theatre has hosted perennially popular productions like Pageant. So if you're at all interested in seeing seminaked, well-greased men going toe-to-toe without much restraint – and if you're over the age of 21 – I suggest you throw your hat in this well-worn ring very soon.

Blake Behind Bars
To write a parody of prison movies, Naughty Austin's Blake Yelavich sentenced himself to 27 movies in the big house 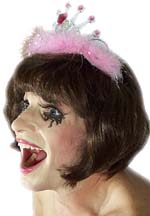 Not Just Another Pretty Face
With Naughty Austin, there's more than meets the eye