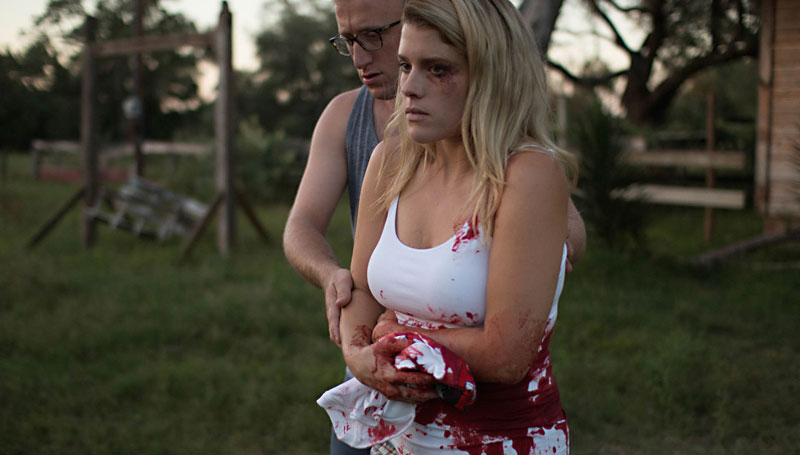 Which do horror fans hate more, 3-D or found footage? Combining them sounds like double poison, but Steven DeGennaro, writer/director of horror-metacomedy Found Footage 3D, wants audiences to embrace the insanity. He said, "It certainly started out as, 'Hey, this is a crazy gimmick that will get us noticed,' but it allowed us to do some things with the 3-D that nobody's ever done before."

For his debut feature, Austinite DeGennaro embraced the goofiness of the conceit to emphasize the terror: a crew of aspiring horror stars, shooting a low-budget horror movie, which the arrogant producer forces the team to make in 3-D. "The producer character is advocating for these things that don't make any sense, and the director character's saying, 'Uh, no, that's really stupid.'"

Of course, there's something evil in the woods around the set but DeGennaro wasn't inspired by horror films. Instead, it was the unexpected double bill of Jackass 3D and Cave of Forgotten Dreams: both pushing the limits of how 3-D is perceived, and both shot on prosumer rigs. DeGennaro said, "They were cameras that we could afford, so we bought three of them."

That still wasn't cheap, so when DeGennaro started fundraising he reached out to a Lone Star horror legend: The Texas Chain Saw Massacre co-writer and associate producer Kim Henkel. His initial hope was that Henkel would just lend his name to the effort "but Kim's not that kind of guy. If he's going to have his name attached to something, he wants to be involved. He gave me the most insightful notes that I could ever hope for. I'd go to his house, and every single page would be covered in red ink."

Technology and script in hand, he now needed a location. "We figured finding an abandoned-looking cabin in Central Texas would be easy," DeGennaro said. Instead, he and producer Charles Mulford spent weeks crossing the region in vain. Finally, they called another Austin filmmaker, Justin Meeks, who owns land just outside of Gonzales. Meeks had already shot two films there (the Henkel-penned Butcher Boys, and brutal Western Kill or Be Killed), plus it had an abandoned cabin and, as a bonus, a trailer park. "Oil field workers usually stay there, so it was perfect. The cabin looked great, it was a great location, and we also had a place where all our crew could stay."

There was one big downside with Gonzales County in June. "Bugs, bugs, bugs." At night, the insects were deafening and everywhere. DeGennaro said, "One of my wife's jobs was that she was the bug bomber. She went out to every location before we shot and set off the mosquito killers."

She may have cleared out the creepy-crawlies, but there's one horror tradition to which DeGennaro is not averse: the good, old-fashioned jump scare. "Never telegraph a death," he said. "I learned that from Deep Blue Sea, and anything Joss Whedon's ever done."