How a running joke turned into a quirky comedy Embarking on a long road trip with an estranged spouse falls directly under the "nope" category, right next to asking for every wedding guest's signed approval for divorce. But that cringeworthy hypothetical is precisely what inspired Austin-based filmmaker Louisiana Kreutz to write and direct her feature length rom-com. "I went to a friend's Quaker wedding about six years ago, and after everyone signs their marriage certificate my friends and I joked, 'What would happen if they got divorced? Would we have to cross off our names?' Years went by and we kept joking about it, and then I realized, 'Hey, this thing has legs.'"

In Quaker Oaths, Joe (Alex Dobrenko) and Emily (Fede Rangel) have been separated since a year after their wedding when she moved out for medical school, but they're still legally paired. Having just been suspended from his teaching job thanks to boogers and faulty admin logic, the painfully awkward dial goes to 11 when they unexpectedly cross paths at Quack's. (The film was shot primarily in Austin, save for some open road scenes in West Texas.) Recently engaged to a unicycling footballer, Emily needs to get the divorce process started, something the communication-challenged former lovebirds have been actively avoiding. When Emily's disappointed Quaker parents throw down the gauntlet, suggesting that notion Kreutz and friends joked about in real life, Joe and Emily take the bait and pack their bags. It's a popcorn and spectate situation from there.

Almost exclusively a documentary filmmaker, Kreutz's genre-crossover was the result of a creative kick she'd needed. "I love making documentaries, but I love watching comedies, so it was kind of a departure. Compared to documentaries where you're trying to figure out the truth, and how to present the truth, it was very liberating to have this super silly story to do anything I wanted with," she said.

Kreutz revved up her comedy angle with personal memories of months spent working on a three-person crew driving across the state with truck drivers on the Austin-based reality show Shipping Wars. Still, the rom-com formula demands a softer side, and ensuring her characters show real emotions and sensitivity was paramount to Kreutz. She drew inspiration from some of her favorite romantic comedies – Annie Hall, Manhattan, When Harry Met Sally..., and While You Were Sleeping. "I really had to start with figuring out [Joe and Emily's] issues and what would translate well on camera, but still be close to my heart. I made communication their main issue, because I wanted to get the highs and lows. Road trips can be super bonding, but then it can really turn. You get your feelings hurt, but you're stuck in a car."

Community is also a key element in Joe and Emily's story, and same goes for Kreutz. After successfully crowdfunding the post-production costs, Kreutz found the support of her loved ones, and the entire Austin film community, very moving. "It was so sweet, and I felt sort of emotional the whole time. Even when we were shooting, we had help. So many people said, 'Oh, you can shoot in our house' or 'We'll make a meal for the crew.' I realized what a giant community I have in Austin and how encouraging everyone is. It's a really sweet scene."

Sat., Oct. 15, 5pm, Rollins Theatre
Tue., Oct. 18, 7pm, Stateside at the Paramount
A version of this article appeared in print on October 14, 2016 with the headline: Divorce, Quaker Style 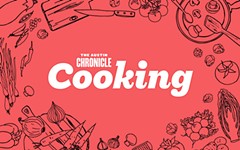