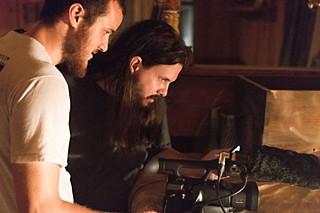 There's something evil at the old Meeks place.

At the end of a dirt track, a few miles outside of sleepy, time-locked Gonzales, Texas, it's the penultimate night of shooting on the indie horror film Found Footage 3D. To the north, the late June lightning storm that blasted Central Texas revs up, sparking like Frankenstein's million-volt generator. The air stinks of ozone and a pack of semi-feral dogs circles anxiously, just outside the lights. The crew doesn't have time to worry about any of that. Doused in bug repellant, stomping the ground to scare off snakes slithering up from the creek, they still have a shot to get.

There's a twinge of recognition with any found-footage horror movie: Filmmakers getting slaughtered before their own lenses. Found Footage 3D apes that convention, with a crew making a found-footage movie, Spectre of Death, as well as their own documentary about making their own mockumentary. Under duress from their dictatorial producer (Carter Roy), they're doing both in 3-D. But what happens when they start finding evidence of something really evil in their fake found footage?

This is the latest chapter in the long history of Lone Star gore, stretching back to the original Texas Chain Saw Massacre itself. It's a direct lineage: When working on his pitch reel/proof of concept last year, writer/director Steven DeGennaro attracted original Chain Saw writer Kim Henkel as a producer. It was Henkel who introduced him to Justin Meeks (co-director of The Wild Man of the Navidad and the upcoming Western, Red on Yella, Kill a Fella). Meeks and Henkel worked together in 2013 on Butcher Boys, and Meeks' isolated property, complete with spooky cabin, is where Found Footage 3D is now shooting.

Deep in the woods, DeGennaro is working through a pivotal scene in the supernatural shocker: a sudden crack, and one of the cast flies back into darkness, jerked away by a harness and evil forces. Meanwhile, DeGennaro's wife Randi Ludwig lights more tiki torches. Anything to keep the hordes of biting, sucking, chittering, clambering insects away.

Back up by the cabin is the complex of production trailers. In wardrobe, Eric Zapata (best known as one of the Austin contenders from Season 4 of SyFy's makeup-effects challenge reality show Face Off) wields his brushes and latex like a surgeon, finessing a gooey mass of wounds inflicted on one of the actors. Over in the corner, film critic Scott Weinberg – who plays himself in the very meta movie – shows off his own very real war wound, a bruise from his first-ever stunt.

Across the wooden walkway, editor Pete Barnstrom shows visiting producers some test footage, including DeGennaro's solution to one of the great conundrums facing his production. Since the film-within-a-film has 3-D footage running on monitors, how could he film that and still have it be 3-D? His solution was simple. Carve up a pair of 3-D glasses and put them over the camera.

Found Footage 3D is currently in postproduction. Check back at austinchronicle.com/screens for updates. 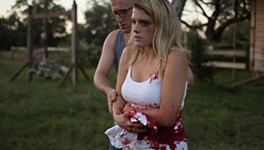