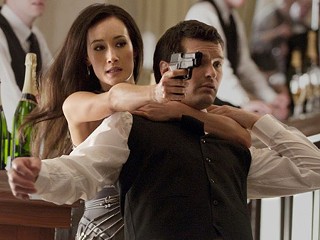 Maggie Q stars in the CW's Nikita, giving new life to the assassin character who first debuted 20 years ago.

Picking up where I left off last week, here's a glimpse at what's coming up on Fox and the CW this fall.

The CW has spent most of its time and space catering to the youth audience. That trend continues with two new series added to its lineup, the action-adventure Nikita and the cheerleading drama Hellcats.

Maggie Q stars as Nikita, the reluctant assassin rescued from death row by a mysterious agency known as the Division. The series more or less picks up where the film version of Nikita left off – with Nikita going renegade and turning on the Division. (That would be the 1990 Luc Besson version; Nikita's also seen life as the English-language film Point of No Return and as Canadian TV series La Femme Nikita, which aired in America on the USA network.) On the CW reboot, Lyndsy Fonseca stars as Alex, the Division's newest recruit, who's heard of the legendary Nikita. As the series progresses, Alex's allegiance to the Division will be tested. Produced by Wonderland Sound & Vision, the drama features a lot of high-impact action; scantily clad, butt-kicking women; and violin-swelling drama.

Cashing in on the popularity of films like Bring It On would be the cheerleading drama Hellcats. Marti Perkins (Disney Channel regular Alyson Michalka) is a scholarship student at Lancer University in Memphis. When she unexpectedly loses her funding, she resorts to her former gymnastic skills and seeks a cheerleading scholarship, trying out for Lancer's high-profile squad known as the Hellcats. The sore muscles and mandatory dorm life she can handle – the egos, hypercompetitiveness, and back-stabbing, less so. Compulsively watchable, the series is much more engaging than any of the other teen-based soaps on the CW, because these young people are actually interesting – thrilling, even – to watch. Another Disney alum, Ashley Tisdale (High School Musical), co-stars as a captain of the Hellcats, described as "a petite, peppy Texan." (Texas and Texans appear to be a hot commodity this upcoming TV season.) Sharon Leal also co-stars as Hellcats coach Vanessa Lodge, with Gail O'Grady as Marti's loving but clingy mother.

Changes in the Fox schedule are based on three big events: the departure of Simon Cowell as the judge everyone loves to hate on American Idol; the end of one of the network's most popular dramas, 24; and the ascension of the network's breakout hit, Glee. Recently picked up for a third season, the musical comedy, which closes out its first season on June 8, snagged next year's post-Super Bowl slot, a huge vote of confidence from the network.

As for the rest of Fox's new fare – and based on trailers alone – my response is a big "meh." Even with an intriguing premise (a man leads two lives in Texas) and the star power of Jon Voigt, the Dallas-based Lonestar looks more soap than drama. On the comedy side, the laughs seem somewhat strained in Running Wilde. In this new series from Arrested Development creator Mitch Hurwitz, Will Arnett stars as an emotionally stunted multimillionaire with too much time and money on his hands. I think Arnett is incredibly funny, but I find it hard to believe that even he can pull off making a superprivileged character likable in this era of corporate bailouts and Wall Street shenanigans.

It's a pleasant surprise to see Martha Plimpton in a comedic role as Virginia Chance in Raising Hope. Plimpton plays the mother of Jimmy (Lucas Neff), who finds himself thrust into fatherhood when the mother of the baby he didn't know he had enters prison. Using flashbacks and absurd situations, Jimmy ponders how he survived his childhood and wonders how and if he can rely on his kooky family to help him be the good father he wants to be.

Young adults helping each other navigate love and relationships is the premise of Mixed Signals (zzzzz) while two cop series round out Fox's fall TV season: Ride-Along, a drama set in Chicago, and the Dallas-based comedy The Good Guys, which already launched as a summer fill-in with plans to continue into the fall schedule. Bradley Whitford is hilarious as Dan Stark, the older detective kept on the force because of his past heroics. Colin Hanks plays Jack Bailey, the straight man and all-suffering partner who is paired with Stark both as punishment and to keep Stark out of trouble.

Next week, a look at midseason buzz and summertime fare.