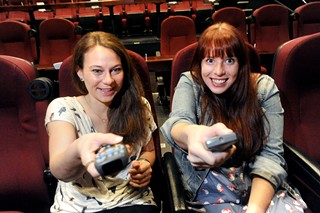 Consider how much television has changed in the past decade and a half. If you tuned in to the first season of The Sopranos in 1999, chances are you watched it on the square screen of a tube television. It got there via coaxial cable on a schedule set by HBO. You couldn't DVR it, or get it On Demand, or stream it on your iPad with HBO Go because none of those things existed.

Today, we're no longer tied to network schedules. Nor are we even obligated to watch current or exclusively American shows (seven seasons of Trailer Park Boys await on Netflix with no commercial interruption). We are "socially connected" to television. We tweet, update the Wikipedia page, and devour recaps. As the technology has evolved, so have the program formats. We now have quarter-hour comedies (NTSF:SD:SUV::), web series picked up by cable networks (Childrens Hospital), and shows that wander from network to cable (Cougar Town) and back again (Friday Night Lights). The spectrum content is different too: On one end is reality television, and on the other, a new tradition of cinema quality, long-arc scripted series by TV auteurs like Terence Winter, Jason Katims, and Lena Dunham.

Despite all the innovation, we still use the term "small screen" to describe TV. Perhaps this is part of the reason TV gets little love on the festival circuit. It's an arbitrary designation at this point; we watch "big screen" movies at home all the time, so why not project TV content in theaters for big audiences? The first ever ATX Austin Television Festival, which takes place this weekend, aims to do just that.

Like a film festival, ATX will present "premiere" and "repertory" screenings, Q&As, panel discussions, and parties. The Alamo Drafthouse South Lamar will show current fare (The League), never-picked-up pilots (Heavenly), and "canceled too soon" series (Lone Star). A roster of actors, writers, showrunners, music supervisors, and studio execs will speak on panels at the Stephen F. Austin Hotel and the Stateside at the Paramount. Highlights include an Adult Swim showcase with Paul Scheer, Rob Corddry, Ken Marino, and others; a panel on show creation featuring Kyle Killen (Awake) and Liz Tigelaar (Life Unexpected); and a forum on the mainstreaming of fantasty, moderated by Ben Blacker of the Nerdist Writers Panel and featuring writers from Game of Thrones, Firefly, and Grimm. Fans of Transformers and My Little Ponies can catch Saturday morning cartoons and eat a pancake breakfast at the hotel.

The most popular event is guaranteed to be the Friday Night Lights outdoor screening and concert at the San Jose, which is free and open to the public. Cast and crew will be in attendance to revisit the show's premiere and finale, and three musically inclined stars – Alicia Witt, Dora Madison Burge, and Jesse Plemons – will take the stage to perform.

FNL executive producer Jason Katims will also be there. "Filming in Austin was such an integral part of making Friday Night Lights," he said in an email. "I continue to be humbled by the ongoing support of Friday Night Lights fans. Creating something that resonates with people is always the goal, so attending an event like this, two years after we finished making the show, is truly a thrill."

Festival organizers Caitlin McFarland and Emily Gipson are both from Texas, but they met in Los Angeles while working in TV. With the help of mentors and coworkers, they assembled the festival's advisory board, which includes staff from Sony, Universal, MTV, Fox, and the Texas Film Commission. Hollywood sound designer Tricia Linklater introduced them to her brother, Richard Linklater, who also joined. This summer, he's launching a travel show on Hulu, Up To Speed starring Timothy "Speed" Levitch.

Because the television industry is so amorphous, assembling the festival was a special challenge, McFarland says. "It's not like a film festival where you just go to a distributor or writer or director. There are 100 different ways to get permission to screen something." Some networks and studios had difficulty with the concept, Gipson adds. "There was a lot of, 'But our show isn't on when your festival happens.' We had to explain, fans don't care. If you're a big fan of a show, you're a big fan all year round."

Unlike traditional film festivals, ATX is not a competition, but a "celebration of the medium" that gives equal weight to current and canceled shows. This is significant because the programmers have timed ATX immediately after the May network upfronts. Some festival presenters have just learned their shows have been renewed. Others have gotten bad news.

For audiences, a show's canceled or off-season status doesn't make the show any less valuable or compelling. "One season of My So-Called Life defined a generation," says McFarland. "People are still talking about Jordan Catalano." Why? "Because television creates community. Whether it's on Twitter or with your colleagues at work, whether it's two episodes or 20 years. You live with these characters and they become part of your life."

McFarland and Gipson are hoping to fill enough seats to bring the festival back next year. As with the world of networks and the Nielsens, the success of the ATX "pilot" will depend on viewers like you.