Tim Gunn is the consummate mentor. When Gunn started to give onscreen advice to young designers on Project Runway in 2004, he was still head of the fashion department at Parsons The New School for Design in New York City. (Since then, Liz Claiborne has snapped him up as chief creative officer.) Now he's rolling into Austin on April 21 to debut Lucky Brand Jeans spring 2012 collections and emceeing a runway show featuring professional and nonprofessional models.

Austin Chronicle: You originally got a BFA in sculpture and later transitioned to teaching design. Can you talk a little bit about that transition and how you see art and design overlapping?

Tim Gunn: I studied fine arts, and about five years before, I studied architecture – for only a semester – and I hated it. In the Seventies there wasn't computer technology, and everything had to be rendered by hand. It didn't matter how great your idea was; if you had one little slip of that pen, your work wouldn't even be considered. I just found it to be extraordinarily frustrating. I thought, "This is ridiculous! I'd rather be studying Japanese calligraphy." My sculptures were very architectural and abstract. When I graduated, although I was very serious about it, I wasn't making any money, so I supported myself by building architectural models for architecture firms in Washington, D.C. That was my segue into teaching three-dimensional design.

At the core of design and at the core of fine arts there are a lot of similarities. Conceptually, of course, they're very different: Fine artists create the problem that they can spend 10 years solving if they want to. And designers have to take a problem outside of themselves, make it their own, turn on a dime, and do it again. I'd like to think that both design and fine arts are barometric gauges of our society and our culture. I'll add, you can't be a responsible practitioner in either aspect without having a comprehensive base of art history.

AC: Do you have any thoughts about these massive auteur designer retrospectives currently in vogue, such as the recent Alexander McQueen exhibition at the Metropolitan Museum of Art in New York City?

TG: Oh, I actually saw it four times. Providing that one has earned a place in the history of the discipline, I think it's absolutely wonderful. I celebrate these exhibitions, especially when they're attracting large crowds of people, because attending an exhibition is a form of education. What I loved about the McQueen exhibit, and largely because people think of him as being so incredibly avant-garde and unwearable, the core of the exhibit was this staggering tailoring. That's the underpinning of everything he did. It's like looking at Picasso's early work or Mark Rothko's – there's, at their very beginning, a mastery of the drawing or painting medium.

AC: One of the underpinnings of your career seems to be education as a mode of empowerment. How do you see the event you'll be participating in here as part and parcel of that larger motivation?

TG: I'm so glad you asked, because Leah Caruso-Salak [Liz Claiborne's director of marketing and special events] and I co-host the event, and what we say right before we go out is: "Let's just hope that people come away from this feeling a little smarter, a little wiser, because we've given them some information that they can apply to themselves. Or share with someone else."

Everything that I do, I try to make it about giving people information. Not a day goes by when I'm not on a quest for more information. I see myself as a constant, perpetual student. It makes the world an exciting and adventurous place. It's quite thrilling – I love the unknown.

AC: You were administrator at Parsons during an important time for queer communities in New York – you have the advent of ACT UP and Queer Nation in response to AIDS. How do you see queer identities working in the contemporary world?

TG: Well, I remember a time when "queer" was pejorative. I'm happy that it's accepted in an entirely different form. When I speak to young people, and I speak to LGBTQ young people a lot, they are so lucky to be in this world now. I also speak to young people about AIDS prevention, about being responsible when engaging in sexual activity. They didn't grow up at a time when people were dropping like flies. What the Eighties did to the fashion industry is forgotten; they have no memory of how devastating it was – how many enormously talented people we lost. I get very passionate about this.

AC: Is there a way we can empower queer youths and others to have affective relationships besides the single-partner relationship?

TG: Well, sure! I think about that all the time. I'm very lucky to have some very close, wonderful friends. I find I'm sated, in a manner of speaking, by these relationships – and it's not even remotely about sex. I don't like spending any portion of my life on a quest for something that I feel I don't have, want, or need. I'd much rather accept the here and now, and make it as impactful, robust, and meaningful as I can. 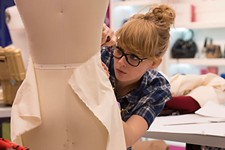 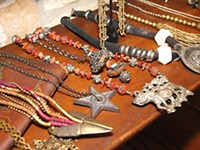 After a Fashion: The DIFFA Difference
Your Style Avatar gets an invitation he can't refuse