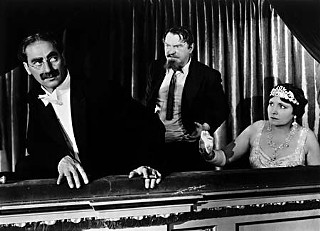 Obstacles to Love: 'A Night at the Opera'

High art collides head-on with a kinder, gentler, but no less absurdist Marx Brothers, and art gets the stuffing knocked out of it (no surprise, but still sublime in its stupendously anarchic way). Groucho, Harpo, and Chico are cast as madcap Cupidians to a pair of star-crossed lovers in this, their first film for MGM Pictures' Irving Thalberg. Inconceivably, the Marxes' previous outing for original home base Paramount, the hypersurrealistic anti-war polemic Duck Soup, was a box office misfire with the public and led them into the graces of MGM's doomed boy wonder and director Sam Wood. Personal preferences aside – Duck Soup is my desert island Marx movie – Opera is by far the brothers' finest and most memorable outing, featuring an incomparable script by the inimitable Broadway playwright George S. Kaufman and Morrie Ryskind, both of whom were old, trusted hands at adapting the Marxes' road-tested (literally: Austin's Paramount Theatre played host to the Marxes' roadshow on at least one occasion) vaudevillian blackout sketches to the screen. Set against the musical backdrop of Giuseppe Verdi's floridly romantic Il trovatore, A Night at the Opera places the Marxes squarely on the side of true love, as Fiorello (Chico) and his pal Tomasso (Harpo, in one of his most honkingly sympathetic-cum-hysterical turns) actively seek to unite young lovers against the wishes of a despicable stuffed-shirt and opera star. Groucho spends equal time conniving and cracking wise, repeatedly taking a comic sledgehammer to both the proverbial fourth wall and longtime femme-foil Margaret Dumont. This is the Marx Brothers film which features the ridiculously inspired "stateroom scene," in which Groucho's shipboard quarters are overrun by an impossible number of unwanted guests while a somnolent Harpo flops atop all. Only Duck Soup's infinitely copied "mirror gag" comes close to equaling the exquisitely calibrated comedy contained within that one tiny stateroom. Released in 1935 at the very height of the Great Depression, A Night at the Opera retains every iota of its original comedic, romantic, and none-too-subtle social commentary, proving beyond a shadow of a doubt that, then as now, "there ain't no sanity clause."

Grouch said it best, and we wholeheartedly agree: "And now, on with the opera. Let joy be unconfined. Let there be dancing in the streets, drinking in the saloons, and necking in the parlor."