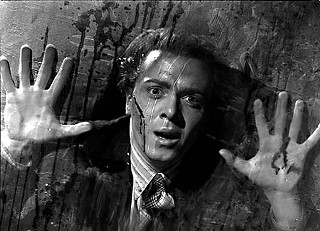 A decade ago, Richard Attenborough was in a public feud with Guy Ritchie. The Oscar winner had accused the Lock, Stock and Two Smoking Barrels director of promoting "the pornography of violence." Some people accused the Oscar-winning knight of being a fuddy-duddy. Nonsense, he replied: A big fan of Reservoir Dogs, he said Quentin Tarantino showed violence for a reason, while Ritchie was just shock for shock's sake. As for being some ancient leftover from a time when British cinema was all about bon mots over tea and crumpets, had the critics forgotten he was in Brighton Rock?

In 1947, producer/director siblings the Boulting Brothers were looking to adapt Graham Greene's novel of gangsters in the sleepy English seaside resort of Brighton. When looking for a young actor to play the part of the razor-blade-wielding psychopath Pinkie Brown, there was only one real choice: Attenborough, whose 1944 performance of the part in London's West End had wowed the critics and terrified audiences. There is something broken in Pinkie. What broke him is never said, but Attenborough constructs him from a series of quirks and tics. From his first appearance, flinching from a crash of lightning, there's a hint of barely restrained brutality and emotional sadism behind his slack, smooth face. When he needs an alibi for a brutal murder, in his twisted mind the easiest route is to marry the one possible witness – innocent, naive tea-shop waitress Rose (Carol Marsh). That way, she can't testify against him in court.

Released in the U.S. as Young Scarface, the film's unrelenting nihilism has stained crime fiction ever since. The film, co-scripted by Greene and noted English playwright Terence Rattigan, is a horrific morality play. Like so many cinematic crime dramas, it's the cover-up that makes things worse as Pinkie and his gang turn on one another after the brutal slaying of an investigative journalist (FX's dark-blue cop drama The Shield owes it a big debt for the criminals-eat-their-own meme).

For all the bleakness, it's driven by Greene's Catholicism. Unusually for Britain in that era, both Rose and Pinkie are Catholics: Yet while she's all about heaven, Pinkie's cosmology holds earth and hell and nothing else. Without her belief in redemption, she would never stay with him. She deceives herself into believing good can come from their relationship even when Pinkie makes his twisted vision clear. "You ever been in love?" he snarls at her. Oh, yes, she simpers, but that only provokes him. "You don't know what it's all about," he coldly growls. "I've watched it. I know love."

The year after Brighton Rock's release, Attenborough played the anti-Pinkie in another crime film, London Belongs to Me. Petty criminal-turned-accidental killer Percy faces the gallows for murder, and the jury is too eager to send him to the noose. When they saw this callow youth on the stand, they saw the irredeemable monster Pinkie. The scar that Brighton Rock left on culture is as deep as those that Pinkie leaves on his enemies and in the soul of Rose.