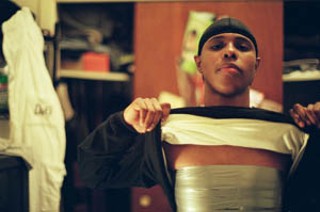 There's passing and then there's passing. In the underbelly of NYC's über-butch black dyke scene, passing means survival. "Scene" is inaccurate, really, because here, passing is so part of daily life that labels like "butch" and "dyke" or even "tranny" or "boi" don't cut it. Some subcultures are so sub that they require their own vernacular. Hence, the Aggressives: young, hot, male-identified lesbians who don't call themselves men but pass nonetheless. Daniel Peddle followed five fierce un-femme fatales for five years, documenting their existences. The stories of army recruit Marquise; hot runway model Kisha; pretty boy playa Rjai; tranny-dating Tiffany; club kid Octavia (whom the camera follows behind bars); and the only Asian on the scene, Flo ("I'm attracted to black girls – they got the booty!"), make for one helluva transcultural joyride, illuminating variety not only for people outside of the queer spectrum, but shining spotlights on variances within.