Zimmerman beats out Flannigan in the oft-overlooked district 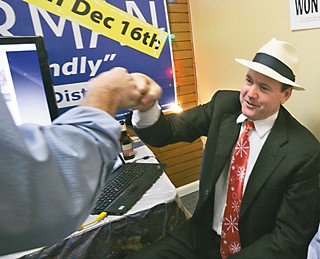 Zimmerman celebrates at his campaign headquarters. (Photos by Jana Birchum) Flannigan thanks supporters after the election is called.

It feels like a very long time ago that The New York Times was speculating that District 6 candidate Jay Wiley might bring a conservative perspective to Council. Instead, along with Wiley's friend Ellen Troxclair and the more moderate Sheri Gallo, Don Zimmerman will be one of three conservative voices speaking from the dais come January. The race between Zimmerman and Jimmy Flannigan started out close, with a separation of 201 votes, but ultimately, it was a gap Flannigan couldn't bridge: Tuesday night's final count had him down by 189. At around 10:30pm at Third Base Sports Bar, Flannigan conceded, expressing pride in his campaign team. "We couldn't have done a better job," he said. "It just did not turn out the way we wanted it to turn out."

Over at Zimmerman's campaign headquarters, the mood was both jubilant and a bit hostile once the Chronicle arrived – he and his supporters were eager to enumerate the ways in which the paper has mischaracterized him – last week's story was tacked to the wall for reference. Asked about his plans for Council, Zimmerman said that he'll start by having a discussion with the other members about whether they're "willing to start looking for a new city manager." The search would be a "good bonding experience," he opined. Although Zimmer­man is a Republican, he's of a different variety than his former opponent Wiley. For example, while Wiley is a strong supporter of law enforcement, Zimmerman has criticized the militarization of the police force, and counts Antonio Buehler among his well-wishers. Zimmerman's aggressive style, his anti-tax and anti-government views, and his willingness to go his own way should, if nothing else, finally force the rest of the city to notice the far northwestern district, half of which is in Williamson County. How much that attention will benefit the district's residents remains to be seen.