All Aboard the Soccer Train! 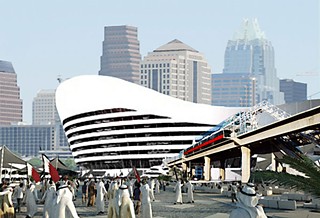 A conceptual vision of what's in store for Austin (Rendering Courtesy of Susan J. Otto and Associates)

From an embargoed press release, dated April 1, the Chronicle has learned that the city of Austin is about to announce the construction of a new soccer stadium in the middle of the Colorado River – a project which will also provide the missing link in a new urban rail line serving the entire Central Texas area. The train will cross the river between Congress Avenue and I-35, stopping mid-river at a new, landfill-constructed and designed "Fantasy Island." Modeled after a similar project in Kazan City, Russia (and another in the Persian Gulf nation of Qatar), the stadium, seating 20,000 for soccer and perhaps far more for NCAA basketball or special indoor events like rock/country/ballet mega-concerts, will be accessible by rail, boat, the new canoe/kayak facility at the mouth of Waller Creek, helicopter, jet-ski, or zip-line. (And as conceptually envisioned, monorail.)

According to a joint statement to be released Tuesday by Mayor Lee Lef­fing­well, Capital Metro President and CEO Linda Watson, MLS Commissioner Don Garber, Travis County Judge Sam Biscoe, Rene Van De Zande of the Austin Aztex, UT-Austin President Bill Powers, Governor Rick Perry, and international soccer legend David Beck­ham, the planning group said, "We think it's time to acknowledge that Austin has long since become a major league city – and what better way to show it than by bringing a professional sports team into the heart of the city, along with an actual, functioning mass transit system." According to initial reports, the project will be funded by a combination of transit bonds (to be brought to the voters in November, as soon as the land-based routes are finalized), private investment, toll road overpayments, and a 25-year commitment of $10 million a year from the Texas Special Events Fund. 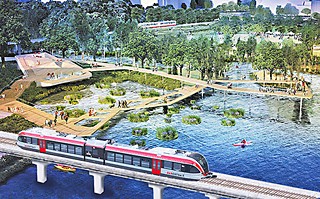 A rendering of the rail approach to Fantasy Island, showing the Promenade and water approaches (Rendering Courtesy of Susan J. Otto and Associates)

"We'll have no trouble recouping that investment of $250 million from the hotel, motel, liquor, and excise tax increases generated by a major league soccer franchise," said Texas Comptroller Susan Combs. "And by the extremely remote chance that those fall short, rates to ride on Cap Metro's rail and bus system can be readily adjusted to keep pace."

Many details remain to be worked out, including the costs of construction – estimated to be north of $1 billion (higher if portions of the train route are underwater, intentionally or otherwise) – security (for investors), and any financial incentives that might need to be negotiated to ensure an MLS expansion franchise here. Design details also remain in progress; while the stadium is intended to include several dozen luxury boxes for corporate sponsors and their guests, state officials and legislators are rumored to be lobbying for additional luxury areas for their families and patrons. Planners expect to limit construction expenses by designing the general admission area as concrete covered in used AstroTurf, presuming that GA ticket holders will be delighted just to be allowed inside the stadium, and won't need actual seats.

Mayor Leffingwell reportedly told an appointed task force reviewing the matter privately that while there remain many logistical matters to be resolved, Austinites simply cannot pass up the opportunity to bring the "soccer train" to the city, whatever the cost. "We need rail, and we need international football," said Leffingwell. "And we'll need more convention hotels to handle the accommodations. We're working on that as well." 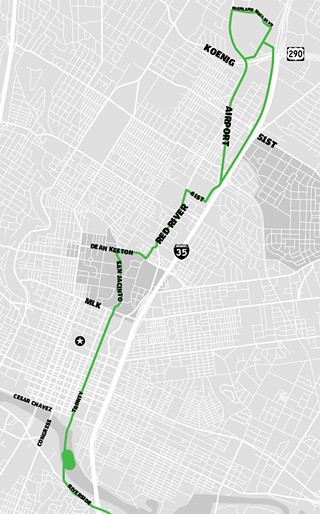 Other local officials and observers responded with statements variously endorsing or questioning the project. Mayor Pro Tem Sheryl Cole, sponsor of the City Council resolution creating the original city feasibility study last week – entitled "Soccer: It's About Time!!!" – noted that the literally lake-based stadium is a perfect capstone (or "cap-island") for the Waller Creek Project, which promises to lift many acres of developable land out of the previously nonprofitable floodplain, and to encourage high-end, mixed-use development all along the creek, leading outward to Fantasy Island. "The sky's the limit," said Cole, noting the recent announcement of the $400 million, three-skyscraper project planned by McCourt Global/Sutton House, just south of Cesar Chavez, near the mouth of Waller Creek.

"Actually, the sky's no limit at all," Cole continued. "If we plan it right, we could have luxury penthouse boxes overlooking the stadium from the roofs of the hotel and residential towers, just like the Wrigley Field rooftop boxes on Chicago's Sheffield Avenue – but with sustainable solar roofs and Texas barbecue!"

Asked for his reflections, Chronicle publisher and "Soccer Watch" columnist Nick Barbaro noted, "I'm generally highly skeptical of any city project on this scale, especially when it's heavily incentivized by public dollars and presents extremely worrisome environmental challenges. But this is about soccer!" Barbaro noted that early conceptual drawings suggest that the stadium will be able to supply some of its own power with "passive turbine" generation. "That's an environmental win-win!" he noted. 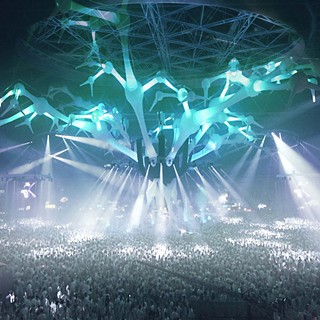 Not all observers were equally enthusiastic. A newly formed advocacy group called Austinites for Soccer Rail Action (AUSRA) released a statement saying that the group firmly believes in getting international football established in Austin as soon as possible – and that it be served exclusively by mass transit. AUSRA also endorsed the island concept as solving the Downtown location conundrum. However, the statement continued, "It's obvious to anyone who's seriously studied the issue that the only viable location for Fantasy Island is on the original Town Lake, west of Lamar Boulevard and opposite Austin High. That's much more convenient to Zilker Park and its existing soccer fields." AUSRA also noted, "Any damn fool understands that. And if the site isn't moved by the city's obviously uninformed soccer engineering group, we intend to put a charter amendment on the November ballot to make certain that it is."

Meanwhile, the Save Town Lake group expressed considerable skepticism that the stadium construction could enable the preservation of lakefront views for all neighborhoods north or south of Lady Bird Lake. "We've got nothing against soccer," Bouldin Creek resident Dave Kane told the Chron­icle, "although we're a little concerned about European-style hooliganism spilling onto residential streets, not to mention insufficient on-street parking. But it's an irreplaceable Austin heritage that anyone should be able to stand on Bluebonnet Lane and see all the way to Elgin. Moreover, if we're going to build in the middle of the lake, we should first be building affordable, single-family, quarter-acre residential lots that preserve the traditional character of Austin in the Fifties. Anything else would be too weird."

Kane also questioned what the massive development means for the recently much-touted South Central Waterfront Plan, a multiyear citizens advisory process tasked with defining the use and character of the entire lakeshore for the rest of this century. "That's something we hear a lot," said a spokesperson for the city's Economic Develop­ment Department, who asked to remain anonymous. "What people don't understand is, that's just a citizen task force. That's not binding. It's like a neighborhood plan. We can change those at any time if a developer comes along who wants to actually build something." 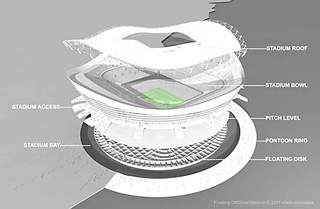 Final realization of the project might well depend on the new 10-1 City Council administration expected this fall, including a new mayor and 10 district-based council members. The two early front-runners for mayor – attorney Stephen Adler and Council Member Mike Martinez – were quick to endorse the concept of Fantasy Island, but were more hesitant to be identified with any particular aspect of the project. "I'm sure we'll have much to discuss about soccer, incentives, redevelopment, and affordability on the campaign trail," said Adler. "But Austinites should know I firmly believe sports are good exercise and teach teamwork and family values."

Similarly, Martinez said that while he had attended no meetings to discuss the project before it was announced this week – "That would be a potential violation of the Open Meetings Act," he acknowledged – and thus knew nothing about it, he wanted to send a message to all Austinites that, as a bilingual public official, he is thoroughly familiar with soccer in both English and Spanish. "Si se puede, and hook 'em!" he concluded.

There are frankly too many declared and undeclared City Council candidates to know whom to ask for a comment. One who didn't want to be identified on the record said, "If it ain't in District 4, I ain't interested. We're tired of Downtown getting all the glory and taking all the credit – and putting fluoride in our water." The candidate was fairly certain the whole thing sounded like so much "hogwash," but said that's "all you can expect from the Downtown insiders who run everything around here."

Before Fantasy Island becomes a reality, there remain several unresolved questions. The Lower Colorado River Authority is reportedly concerned about the potential effects of what will effectively be an eighth "Highland Lake Dam" in the middle of the Colorado River. "But we're certain all the bugs can be worked out or ignored in time for construction," said Perry appointee and board chair Timothy Timmerman. "If the governor's behind it, who are we to quibble?" The Save Our Springs Alliance issued a statement concerning the potential environmental threat to the Waller Creek spotted-back turtle – an endangered species with a range confined to one square meter of intermittent creek water – and indicated that SOS was prepared to file a lawsuit in federal court against the governor, the city, the county, the planning group, and all its members.

Finally, when contacted for comment by the Chronicle, some of those named as directly involved said either that they had never heard of the project or suspected that the entire announcement was a hoax. The Chronicle News department is pursuing those allegations, and should anything turn up, we'll certainly be the first to report it.