An unofficial rendering of the dome's nine levels

My mantra on Saturday night of South by Southwest Music 2011: I am a human pinball.

First, the Dead Milkmen splatter up dust and grit at East Side Drive-In, old-school punks espousing the work of new-school punks. Now, it's onto Odd Future at Buffalo Billiards, playing their official SXSW showcase after rampaging through a thousand years of day parties. I shoot down Sixth Street, darting around dazed and confused texters, people on stilts, and a midget in a ski mask. Sometime after midnight, the group finally hits the stage.

"Fuck Austin!" they shout after 15 minutes, throwing down the mic and exiting their citywide stage for good. What a perfect end to the Festival, really.

I begin elbowing my way back down Sixth, breaking free of the slow-moving zombie hordes. I take a shortcut down Seventh, through the back alley of the Beauty Bar. This time it's a throng of people dressed in black, many wearing bandanas around their faces, pressed up against the fence trying desperately to see a Death From Above 1979 reunion. Then I hear the tapping of hooves behind me, breath on my neck. The Four Horsemen? The Austin Police Department.

Intense scene. After the lunacy of that super moon Saturday, it's clear Austin's at a tipping point. Downtown architecture has remade the landscape over the last decade, matching a population explosion that's propelled "our town" into the Top 20 largest U.S. cities. When you've got tens of thousands of people shaking that pinball machine, it's tilt, sucka. But what to do? The secret's out. It was only a matter of time. Perhaps that's why Monday morning felt so surreal.

At first we thought it was a joke. That is, until we saw the blueprints from Dallas' Future Design Concepts, drawn by renowned architect Alec Dante, a protégé of R. Buckminster Fuller. A nine-level "festival structure" in Bastrop? The Chronicle News department collected hard data for the proposed geodesic dome (see "Dome and Domer," News), with its claims of being "completely sustainable, constructed from repurposed and recycled materials." It would also "act as its own solar power source." Via e-mail, Dante added to the list a "state-of-the-art sound system" by the same Nashville firm that outfitted ACL Live at the Moody Theater, plus surrounding campgrounds and "rehydrating" stations.

"Enough just became enough," explained SXSW Managing Director Roland Swenson when contacted about the dome. "If Austinites really don't want South by Southwest in this town, we'll move it. Then nobody can complain about it being intrusive. We'll own all of the appropriate real estate."

From what our editorial board was shown, the dome is specifically customized for a music festival such as SXSW, wherein all official performances are held inside and then, as with the vaunted Kerrville Folk Festival, attendant shows occur in the campgrounds after hours. Taking a page out of the W Hotel's book, sleeping quarters connect directly to stages on the second and fourth levels. A Living Foods Village is already proposed for the fifth level, as are bike rentals, child care, and free yoga. The design also includes a companion resort that will be self-supporting when no event is going on.

Dante stated that the 10,000 person per day capacity wouldn't be a problem and that the interior design would "utilize space in an efficient, linear fashion, with maximum ephemeral effect.

"It will be a Gesamtkunstwerk, as Wagner was fond of saying."

Cue "Ride of the Valkyries." Still, Dante left a lot of unanswered questions. With sound and permit issues besieging clubs Downtown (see "Off the Record") and causing owners to lose money during one of the busiest times of the year, where do live music venues fit in the dome, besides a proposed Saxon Pub, Emo's South, and the Waterloo Records kiosk on the sixth level? Having all the "rehydrating" systems outside the dome smells like $4 for a bottle of AquaBueno. Is this really just a fancy-looking mall? How will it improve the "festival experience"?

"The structure is really going to be a free-moving space," explains Donna Gilmartin, head of PR for Future Design Concepts. "Don't think of it as just a dome in Bastrop. It's going to be a very controlled but very open experience, to allow maximum music enjoyability. I think it's really going to bring fans the world over together in a positive, multileveled way. The fluidity will allow for as many as 85 smaller stages, or it could be reconfigured as two to five major stages with a few dozen smaller ones. This low-resolution camera phone shot is the only image of official city plans that The Austin Chronicle is allowed to print.

"It's a festival community of the future. No more fences or barriers. The dome will move with the people."

Will it level the playing field for musicians?

"I bet there would be a huge underground resurgence," says Ben Webster, one half of local duo Butcher Bear & Charlie. "All the big shots would be in one place. I've heard lots of talk of some sort of 'complex' being built. It could work.

"Then again people don't want to feel like they're at Six Flags, you know?"

The Chronicle was allowed to view an additional list of proposals:

• "Carousel to the Future" on ninth level

Construction is slated to begin this summer, and it goes without saying that this is a huge shift for Austin live music, as well as for Bastrop. I asked Swenson if just one event over 10 days could generate enough revenue to make this project economically sound; he commented that "We've already contacted other festivals about using the space."

Gilmartin concurs that if all goes well with SXSW 2012, the dome will indeed be used for other Austin events, including Old Settler's Music Festival, Pachanga Latino Music Festival, Chaos in Tejas, and Fun Fun Fun Fest – with the Austin City Limits Music Festival remaining the lone hold-out.

"There are several festivals we've long wanted to launch, but we didn't know if Austin was the right place," Swenson adds. "We're thinking of a national karaoke fest, and South by South Covered, for cover bands, which is something we've been considering for more than a decade."

Naming rights are already being negotiated, which could provide enough revenue to support the dome even if a hotel room is never rented or a venue is never filled. Swenson dropped names like the Bank of America Folk Stage, and revealed that the U.S. military had approached them about possible recruitment opportunities.

The dome will no doubt spark environmental and political debate, but this is still Austin. Want to have a say? Enter the Chronicle's contest to name the dome at: austinchronicle.com/dome. 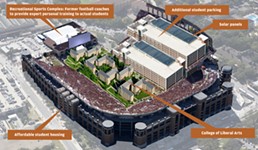