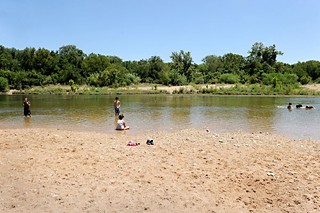 East Side Tubes is no more.

And in its sinking – following the nautical tradition established by Captain Ahab – the fledgling river tubing shop (which also rented kayaks and fishing equipment) managed to take down Secret Beach and swimming under the Montopolis Bridge along with it. Last Thursday, City Council passed a ban on tubes and swimming from the Longhorn Dam to the Montopolis Bridge, without public objection.

The Parks Board put up a rhetorical fight over the banning of tubes on the East Austin section of the Colorado, but ultimately took no action on the proposal by the city's Parks and Recreation Department. At the time, the board expressed skepticism about the reasoning behind the new ordinance, and the "Texas-ness" of prohibiting access to a public waterway, but the fight seems to have ended there. Council passed the ban unanimously, in a 7-0 vote. And, despite the legendary popularity of Secret Beach and swimming under the Montopolis Bridge, not one person showed up at the Council meeting to oppose the prohibition.

There is no question that the ban was prompted by attention focused on East Side Tubes. That attention to the business – based across the river from Secret Beach – alerted the Parks Department to safety concerns along that part of the river. Those concerns center around the danger of "swift and fluctuating waters" from the Longhorn Dam, which opens on an irregular schedule – although seemingly with sufficient warning that downstream users would know to leave the water.

This danger was noted in a report by PARD that detailed the need for a change. The report charted rescue incidents on that section of the river from 2006 to the present, and found 31 rescues had taken place over the past seven years. (Some of those, apparently, were of people who had driven their cars into the river – that's also prohibited, but unlikely to be remedied by a code change.)

At any rate, the city's message to floating hipsters and overheated but cash-strapped Eastside families is officially discouraging: It is now illegal to swim or float the river, though kayaking remains legal. (Would-be Eastside kayakers will need to bring their own boats, however. East Side Tubes may have started as a kayak rental shop, but with its walkway to the river closed and unlikely to reopen, that business is no longer running.)

Farewell, Secret Beach. We'll always remember that time we saw Elijah Wood there but pretended we didn't recognize him.