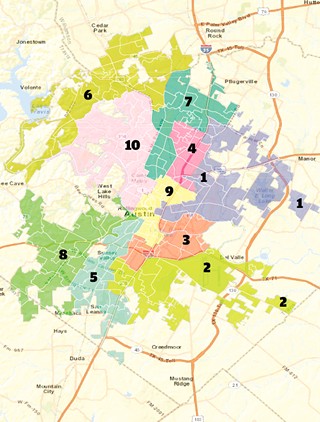 Austin, you have your districts.

On Monday night, the Independent Citizens Redistricting Commission voted unanimously to adopt its final map, which it will formally certify Nov. 25. Last week, in the final hours of the ICRC's final public input meeting on City Council districting, things turned in a positive direction. This isn't to say that the late meetings were free of criticism – far from it. But even the enduring complaints about the decision to fracture South Central Austin (readdressed in some slight late revisions) were couched in praise for the commission and its members' hard work.

Joan Bartz, founder of the University Hills Neighborhood Association, established herself as a fixture at ICRC meetings. At the final public input meeting, Nov. 14, she declared that – if she only had them on hand – she would give gold stars to everyone. It was a sentiment that ran throughout the last, almost celebratory, meeting. It was not entirely clear whether people had become giddy at the prospect of a new day in Austin, or simply thrilled in the knowledge that they wouldn't have to attend any more ICRC meetings for a decade.

Despite the burgeoning warm glow, there remained conflicts. The Northwest remained split on how the Northwest should be split. And East Riverside Planning Contact Team and South River City Citizens member Toni House reiterated the concerns of many South Austinites, who steadfastly object to being included in a district with Downtown. She stressed the difference in interests between her community and Down­town, citing a history of opposing positions in the two areas of zoning and neighborhood planning.

"I seriously doubt that any candidate could truly represent the entire district, and will mostly likely focus on what Downtown wants," said House. "It's incomprehensible to me why you chose to ignore probably our strongest natural geographic boundary – Lady Bird Lake." Her remarks met with cheers from the crowd at the Lodge (formerly the Elks Lodge).

Though vocal opposition from Barton Hills and Zilker neighborhoods had finally managed to extract their areas from the Downtown district, others weren't so lucky, and House articulated concerns that many share: that Downtown voters will dominate any representative from a district – even 80,000 strong – that includes them. As Govalle/Johnston Terrace Neighborhood Plan Contact Team member* Daniel Llanes put it, "It sounds like nobody really wants Downtown. This is understandable. They are people from Manhattan who want to turn Austin into Manhattan, and we all know that."

But, like a chain of falling dominoes, once Barton Hills and Zilker were put into the southern slice of District 5 – away from presumably dominating Down­town – people from neighborhoods like Onion Creek and Southwood told the commission that they weren't crazy about the change. Austin Tejano Democrat Fred Cantu said as much at the final public input meeting of the ICRC, where he joined the others congratulating the commission on a job well done, but expressed disappointment that his neighborhood would most likely be served by a representative from one of the neighborhoods closer to Downtown.

In general, though, there has already been a shift toward acknowledging the map as a reality at the meetings.

Bartz helped lead the charge to the brave new future last week. "There's something good that can come out of all of this. Yes, everybody is uptight now. They're tense. They're unhappy. But, who knows? Maybe this whole process is going to result in everyone in the city starting to talk to each other and working together across the board," she said. "Y'all better get used to it, because the magic number in this process is not one – your rep – but six. Your rep isn't worth a durn if he can't get six other reps to vote with him.

*An inaccurate identification was originally given for Daniel Llanes; it has been corrected.