Will Medicaid Buy a Medical School?

Waiver program could have payoff of hundreds of millions

On June 27, the Austin City Council's Audit and Finance Committee heard a wide-ranging four-year tax forecast from each of Travis County's major property-taxing entities. There, amid hopes for urban rail, rumors of various area tax increases, and potential bond actions, council members were reminded of what has become a clear priority for a handful of the region's power brokers: a four-year medical school for the University of Texas at Austin.

Since September, when Austin's state Sen. Kirk Watson first publicly called for the ambitious project at a Real Estate Council of Austin forum, the effort has gained the support of Mayor Lee Leffing­well, Travis County Judge Sam Biscoe, and, naturally, UT-Austin President Bill Powers. The cost of the project would be high. And though Central Health is currently examining the possibility of a tax election in November, they'll need more funding to underwrite their portion of the med school.

Central Health will rely on funding partnerships – $250 million from Seton for a hospital facility, and as much as $30 million annually from UT, to name two – and a complicated federal program that was triggered the last time the Legislature came to town. The potential use of the program, known as the "Medicaid 1115 Waiver," presents what med school supporters are calling a perfect confluence of events.

In Fact Daily reported that Watson told RECA, "This our moment. This is our chance." Central Health President and CEO Patricia Young Brown was no less sanguine when she appeared before the City Council's Audit and Finance Committee. "This is what I've been waiting for my whole career," she said about the 1115 waiver and its role in transforming the region's public health policy. "It embodies everything that we've been envisioning but we didn't have the means to do."

Essentially, the waivers, if approved by the U.S. Dept. of Health and Human Ser­vices, let states use Medicaid money for programs otherwise not authorized under federal law, if it can be shown that those programs advance the purposes of Medicaid.

Squint just hard enough, and you might have been able to see a line between 2011's Senate Bill 7 and a UT four-year medical school. Gov. Rick Perry signed the bill into law just a month before he officially began his doomed effort to win the GOP nomination for president. As the Texas Tribune reported, the measure was "a fan favorite for abortion opponents, because it includes amendments aimed at taking more family planning dollars away from outfits like Planned Parenthood, and barring hospital districts that use tax revenue to finance an abortion from getting state funding, except in the case of a medical emergency."

But the bill also added the Rio Grande Valley's Medicaid program to the ranks of the state's managed-care programs. In so doing, state lawmakers placed the last of the Medicaid regions into managed care, turning them into something like public health maintenance organizations. With the addition of the Valley to the state's managed-care ranks, Travis County Central Health, its regional county partners (Travis County serves as the anchor for a six-county region that also includes Hays, Bastrop, Lee, Caldwell, and Fayette) and every other such entity in the state of Texas became eligible for Medicaid 1115 waivers. The waivers, and the application of federal money that can be received through them, are expected to play key roles in creating a local medical school.

With all of the state's Medicaid programs under managed care, a portion of federal Medicaid reimbursement disappears. Under the waiver program, some of that funding could return, so long as the entities applying for it can demonstrate that they are using the 1115 waiver to positively "transform health care delivery" in some way. Local officials argue that a medical school, and the additional doctors, residents, and a host of other benefits it would presumably bring to the region's low-income residents, would constitute such a transformation. However, the proposal does leave open questions, most particularly: Would a medical school benefit low-income residents sufficiently to justify the expenditure of Medicaid funds designated for their health care?

When activated, the 1115 waiver returns federal funds to the state at a rate of $1.40 for every $1 that a local health care district spends. Young Brown and her colleagues aren't yet prepared to discuss the specifics of Central Health's plan to use the waiver to help fund the medical school, and questions remain about the basic rules regarding eligible projects. But it appears that Central Health will attempt to either directly claim the cost of the operations of the new medical school as an eligible expense, or claim other regional projects as 1115 expenditures and use the associated savings to further fund the medical school. Central Health Board of Managers Chairperson Rosie Men­doza said Wednesday evening that a decision about medical school financing will be announced around Aug. 15.

Whatever happens, the 1115 payoff could be in the hundreds of millions. Which is to say that, if it all works out, Watson and his Austin blue island can actually thank their deep red Lege for something. 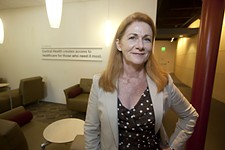 The Med School Solution
Can a Central Health/UT-Austin/Seton medical school project – and its spinoffs – fill the gaps in Travis County health care?