St. David's formally opposes the proposition to build a med school in Austin 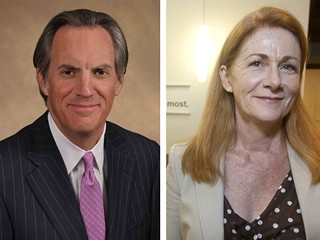 Until last week, setting aside recent legal hijinks on both sides – brought to you by suburban Tea Party gadfly Don Zimmerman and former state Rep. Glen Maxey – the fight over the Central Health tax increase (the first Proposition 1, aka "The Med School Prop") had been a relatively tame affair. Zimmer­man and his Travis County Taxpayers Union have sued on Voting Rights Act grounds – charging, preposterously, that the ballot language is too confusing for minority voters. Maxey subsequently filed an ethics complaint against the TCTU, saying Zimmerman hadn't filed the required disclosure documents. These and other minor contretemps seemed unlikely to derail the Prop. 1 campaign's momentum.

But last week, in a sudden move that reeked of sour grapes, St. David's HealthCare – the Central Texas hospital chain not directly included in what would become a massive new public health initiative if the proposition passes – announced its opposition, saying the proposal represents misplaced priorities, or (as it told the Statesman) "a shell game."

"Before spending millions of tax dollars on a medical school," said St. David's president and CEO David Huffstutler in an Oct. 24 press release, "we want Central Health to meet their primary obligation of providing indigent care in Central Texas. ... This is not an anti-tax or an anti-medical school issue. ... This is an issue about ensuring a taxing authority is doing what it was created to do." Maybe. But don't be surprised if you just can't get the scent of vinegar out of your nose.

In this region, there are three major (yet still inadequate) safety-net health care providers: the emergency rooms at St. David's, Seton, and University Medical Center Brackenridge. As part of an agreement with the city of Austin, Seton (a nonprofit) assumed management of Brack in the 1990s. As Central Health's financial and management partner in the new health care delivery system attached to the potential tax increase, Seton is also the hospital that stands to benefit most from Prop. 1. Seton does $175 million in Medicaid business (sans the Brackenridge numbers), and Brackenridge pulls in about $153 million.

That leaves St. David's, a partially for-profit entity that does roughly $165 million in annual Medicaid business. Though that figure could be reduced if Central Health does in fact transform regional care, at least some un- and underinsured Austinites will still turn to St. David's emergency room for care. Huffstutler says that St. David's and Central Health tried as late as Oct. 15 to figure out a way to get his organization involved in the new system. When nothing worked, the hospital decided to oppose the proposition that would fund it.

And that could very well be all there is to the story – that St. David's decided the med school isn't a good deal. But in a full-throated rebuttal, Central Health said St. David's had declined to provide an adequate financial commitment to become a part of the deal (in contrast to Seton's promise of $25 million a year). "St. David's participation in this unprecedented community effort is needed. However, true partnership is not possible without commitment, and this includes bringing financial resources to the table." Huffstutler rejects this – saying that St. David's demonstrated underwriting of indigent care constitutes a considerable financial contribution to the public health effort.

But Central Health's rejoinder raises the question of St. David's finances. St. David's is partnered with the Delaware-incorporated, Nashville, Tenn.-based health chain HCA. In 2006, reports The New York Times, HCA faced weakening profits and a decline in stock price. Cue the leveraged – that is, private equity – buyout. HCA's was engineered by deep-pocketed Merrill Lynch, as well as the brother of former Tennessee Republican Sen. Bill Frist, who worked with none other than Bain Capital, the Mitt Romney-founded venture capital firm. The deal also included the leveraged-buyout vets at Kohlberg, Kravis, Roberts (the same KKR that participated in the leveraged purchase of TXU Energy, burying the parent firm of Oncor, CenterPoint, and others under a suffocating mountain of debt) and personal funds from the Frist family.

Like the TXU deal, the HCA acquisition relied on an avalanche of borrowing. "The deal essentially doubled the amount of debt held by HCA hospitals to $26 billion," reports the Times, and subsequent aggressive billing practices and cost reductions "sometimes led to conflicts with doctors and nurses over concerns about patient care." Nevertheless, HCA has become a profit monster. Reported the Times: "The financial performance [of the company] has been so impressive that HCA has become a model for the industry. Its success inspired 35 buyouts of hospitals or chains of facilities in the last two and a half years by private equity firms eager to repeat that windfall."

Asked about that relationship, Huffstutler insists that, as part of its agreement with HCA, the local hospital is insulated from the debt that's been racked up by the giant chain. "St. David's HealthCare is a partnership, and one of the three partners is HCA," said Huffstutler. "As a separate, independent partnership entity, the St. David's HealthCare Partnership has no obligation for, nor any exposure from, HCA debt or other financial obligations related to HCA."

Yet presumably HCA's partnership interest would be affected by changes in St. David's bottom line. As we reported earlier ("The Med School Solution," Sept. 14), all of Texas' Medicaid programs are now organized under a managed care system. That arrangement takes a chunk of indigent care reimbursement dollars off the table, but leaves hospital districts the ability to partner with a hospital facility and apply for what's known as a "Medicaid 1115 Waiver." Under that program, if the organizations can demonstrate that they are substantially transforming health care in the region, they are eligible for $1.46 from the federal government for every $1 that they spend.

The Central Health/Seton partnership – an arrangement that will be fueled by the financial windfall that could come via the Prop. 1 vote – is an 1115 undertaking, and last Friday, Central Health announced that U.S. Health and Human Services had approved its application for matching funds under the 1115 Waiver program – presuming, that is, that voters ratify the proposed tax increase that would draw down the funds. St. David's has now been left out of that particular 1115 arrangement, although under its own efforts, St. David's still stands to benefit from a portion of the 1115 funds set aside for uncompensated care.

Still, one wonders about the pressures created by the relationship between St. David's and HCA. Though St. David's portion of the partnership agreement survived a challenge to its tax-exempt status from the IRS in the late 1990s, HCA plays a role in the hospital's functions, and in a document filed by the company with the federal Securities and Exchange Commission, HCA described the risk associated with a change in policy.

"A significant portion of our patient volume is derived from government health care programs, principally Medicare and Medicaid," reads the HCA filing. "Specif­ic­al­ly, we derived 44.5% of our revenues from the Medicare and Medicaid programs in 2011. Changes in government health care programs may reduce the reimbursement we receive and could adversely affect our business and results of operations." It would seem this recent shift in Texas Medicaid policy would qualify for the above description – thereby potentially affecting St. David's (and HCA's) bottom line. Whatever the case, the local debate over Prop. 1 is now officially well outside the realm of small-time political infighting and has entered the arena of major political and business players, jockeying for advantage, and even market share. As the African proverb has it, when elephants fight, it is the grass that suffers. And in this case, the battle is casting a dark shadow over the proposal to transform Travis County public health care.