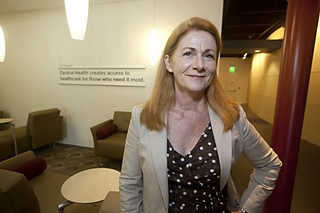 The morning of Sunday, Aug. 19, the presid­ent and CEO of Travis County Central Health, Patricia Young Brown, woke to find her face spread across the first page of the Austin Amer­ican-Statesman's Metro section. In a Q&A by the paper's Mary Ann Roser, Brown, Central Health's Chief Com­mun­i­cations and Planning Officer Christie Garbe, and Chief Financial Officer John Stephens tried (as the Statesman put it) to go "Behind the Tax Increase" that the organization will ask voters to approve on
Nov. 6.

Ever since Austin state Sen. Kirk Wat­son first unveiled the idea at a Real Estate Council of Austin event last September, regional agencies and governments have scrambled to find funding possibilities for the massive project, which could run the involved parties (all told) as much as $4.1 billion over 12 years. At last check, the University of Texas is on board for at least a $25 million annual contribution that would climb to $30 million over the first eight years of the school's existence. Central Health, according to the Statesman, would cough up about $35 million annually over 12 years – or a total of $420 million. The Seton Healthcare Family expects to provide nearly $2 billion, including $250 million that would ultimately result in a replacement of its aging but centrally located Brackenridge hospital facility.

Beyond all of that, Central Health – through a new 501(c)(3) nonprofit entity it has formed with Seton – plans to explore the possibility of drawing down funds from a federal Medicaid program colloquially known as the "1115 waiver." Under that provision, if the various entities involved in a potential medical school can demonstrate that they are paying for an assortment of new projects that will transform the delivery of health care in the region – ultimately to the benefit of Medicaid patients – they can tap the U.S. government for $1.46 for every dollar they spend. Thus, $1 million becomes $2.46 million, $100 million becomes $246 million, and so on.

But to make it all work, Central Health is asking for a tax increase, to be placed before voters on Nov. 6. Watson asked for a raise of five cents per $100 of property valuation; Central Health's board obliged, endorsing that increase, which would bring the district's rate to just over 12 cents for every $100 of property valuation. In dollar figures, that would mean (if voters approve) that someone who lives in a home valued at $200,000 would see an increase of $100 on their annual tax bill.

This brings us back to Roser's question: "Why should Travis County taxpayers help pay for a medical school?" Brown's response was measured, hopeful, and vague. "What residents are paying for is health care delivery to the community. We're not building buildings. What we're proposing to do is pay for care through medical school faculty, residents [doctors in training] and medical students," she told Roser. "We're also trying to leverage an amazing opportunity we have been presented ... [with] the 1115 transformational waiver to essentially support this new delivery system, the expansion of services and the creation of a new teaching hospital and new medical school. All of these bring more services to our community."

Her words could well have been pointed toward the Southeast Austin community of Dove Springs, where for roughly two decades residents have been looking for an adequate solution to their public health needs. The success of the medical school as a community project will to a degree depend on whether residents of Dove Springs (and similarly underserved regional communities) finally get their needs addressed. Come November, the citizens of Travis County will be asked for a massive down payment on that promise.

With Watson quietly twisting official arms, the word around the various regional governmental entities was to keep all other fiscal ballot requests to a minimum. The city of Austin bond advisory task force trimmed an ambitious, nearly $600 million bond package to $400 million, which was cut to just $385 million by City Council after Mayor Lee Leffingwell insisted he didn't want a proposal that would force the city to raise taxes. The Austin Independent School District delayed its request for a tax increase at least a year ("This was not our year," AISD Board President Mark Williams told the Community Impact News­paper). Travis County appears headed for a modest tax increase, but county officials accomplished a large bond issue last fall. Neil Vickers, Austin Com­mun­ity College's associate vice president of finance and budget, has called his organization's 0.3% tax increase proposal "relatively flat."

The promises from Central Health, the willingness of other parties to make room for a health district tax increase on the November ballot, the push from Watson that makes it all go: A medical school may not be completely preordained, but it sure has the markings of incarnation. Yet notwithstanding the potential 1115 waiver dollars, furious nodding from officials, and the uncertain endorsement of Travis County voters, the fundamental question remains: Can a medical school in Central Austin transform the way we deliver health care, especially to the lower-income residents of the far-flung capital region, in a way that no other approach could? 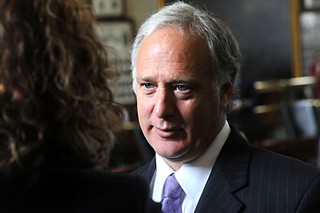 Should we make the investment?

Modern local public health in Texas goes back at least as far as a 1953 state bill that allowed for the creation of "hospital districts" – entities that could use property taxing power to raise funds to build public hospitals, clinics, and the like. Dallas Coun­ty took advantage of the option in 1954. Bexar followed in 1955, El Paso in 1958, Tarrant in 1959, and Harris in 1966. Nueces County had one by 1968.

But in Travis County, only the public hospital itself – Brackenridge, which dates back to the 19th century – boasts any kind of history. For decades, the facility – especially its emergency room – has served as the city's health care safety net. There were also community clinics managed by the city of Austin. With hospital consolidation making single-facility operations more difficult in the 1990s, the city asked Seton to take over at Brackenridge in 1995.

Young Brown tells the Chronicle that this was a most uncommon situation for Texas. "Seton took on full financial operating risk of Brackenridge," she says. The arrangement was not one that the city was eager to shake. But as the region continued to grow, so did its population of un- and underinsured. With pressure on the system mounting, voters approved the creation of Travis County's Central Health district in 2004 – more than a half-century after the Tex­as Legislature gave counties that power.

The district inherited whatever taxing jurisdiction that Austin and Travis County had in terms of community health. Accord­ing to its current mission statement, the organization uses those funds to create "access to health care for those who need it most."

Yet, despite clear needs for public health care in and around the capital region – and a diminishing commitment from the state – Central Health has held its tax rate at a relatively stable figure that generally hovers between six and eight cents for every $100 worth of property.

A look at the per capita tax impact – property-value neutral – puts this in perspective. In FY 2012, Dallas County residents paid an average of $172 per person to their hospital district. Tarrant County residents coughed up $149. The Bexar County Hospital District drew $162 per person; El Paso, $86; Harris, $122; and Nueces, $91.

By contrast, Travis County residents currently pay just $71 for their hospital district. Young Brown says the district, like most local jurisdictions, has relied on the rise in property values to fuel an increase in funding that allowed it to keep its tax rate relatively stable since its creation. In an odd refrain more fitting perhaps for Lubbock County – which has had a hospital district since 1967 – Central Health officials call this doing "more with less."

"We have been very conservative stewards of the public funds," Young Brown says. But, she says, such a low tax rate is "not sustainable over time."