pdf
ON THE COVER:
The SOS Ordinance Turns 20
news

Remembrances of an election that changed Austin's political environment

Memoirs of a Movement

Remembering the campaign to Save Our Springs

Images from the vault

The Battle for Barton Springs: A Brief Timeline

The Chronicle's Chronicles of the historic battle to save Barton Springs
You can also download this special edition as a PDF (120MB).

Point Austin: Fire 'At Will'

Extending 'just cause' protections to all city workers

Then There's This: Longing for the Future

For better or worse, SOS was a political game-changer

Will Medicaid Buy a Medical School?

Waiver program could have payoff of hundreds of millions

Council: If This Is Thursday, the Public Hearing Is Closed

Short-Term Rentals: Can't We All Live Together?

Dewhurst and Wentworth lost to Cruz and Campbell

Austin Formula One Races the Clock

Construction moves at a clip at F1 track

Parking spaces and annual race inaccessible to people in wheelchairs

Jail and several courtrooms will get videophones

'Top Chef' champion Paul Qui is on the move

The Hatch Chile season is here

The Girl Who Met Robert Johnson

Divine Fits debut at Beerland, Willie hops the Railroad, and Ume gets a call from Perry Farrell.

Not Your Average Joe

'Sushi: The Global Catch' examines the ruinous impact of overfishing

World cinema takes a swing at the police procedural

This third film in the tween series is funny without being in any way condescending to its target audience.

The Queen of Versailles

Ruby Sparks tries hard, and though it's a likable film she never completely sparks.

This Total Recall is fast, furious, and frequently fun, but it lacks the snappy, weirdo vibe of its predecessor.
arts & culture

A toast to exceptional musicians with their namesake cocktails in hand

The Bard is rampant and rules this Hidden Room.

Baroque on the Border

The MACC goes for baroque with the narco corridos
columns 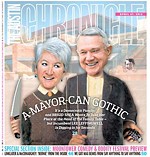 The Common Law: Preempt Fight With Your New Landlord

After a Fashion: Feathers and Beads

Your Style Avatar on the Texas Tease

The Luv Doc: How Old Is too Old?

Old people creep everyone out - including themselves

TXRD has dropped the Lonestar from its name, but the rivalries remain