The Lights of Texas Are Upon UT

What is UT doing about its light pollution? 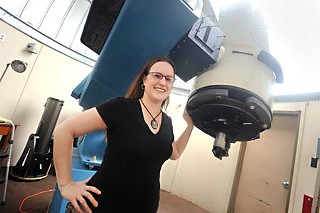 Blinded by the light: Lara Eakins of UT's astronomy department favors dimming the bulbs on campus. (Photo by John Anderson)

Earlier this month, the University of Texas at Austin Department of Astronomy and the McDonald Observatory devoted a week to explaining to Texans the dangers of light pollution ("Don't Go Into the Light," July 2). The practice of turning night into day with unnecessary lighting has been shown to affect sleep cycles, as well as animal breeding and migratory patterns, and can make driving harder. Yet as one of the biggest light polluters in Austin, is UT walking its own talk?

As a city within a city, UT owns some of Austin's worst light emitters: Topping the list are Darrell K. Royal-Texas Memorial Stadium, Disch-Falk Field, and the UT Tower. Illuminated, these buildings have become an iconic part of Aus­tin's skyline, but it costs UT tens of thousands of dollars every year to light the night sky. "Thankfully, those aren't on every night," said Lara Eakins, technical services supervisor in UT's Astronomy Department. She has run UT's public star-watching parties since 1995, a job made more difficult by light pollution. While using the telescopes on Painter Hall and the Robert Lee Moore building "helps a little," Eakins said, "when the background sky is bright, it decreases the contrast so we can't see fainter objects such as nebulae, star clusters, and galaxies." City life brings another form of pollution: airborne fumes from vehicle exhaust systems. "When we get a large amount of particulates in the air or have an ozone action day," she explained, "the light just scatters across the sky and wipes out all but the brightest objects."

Even though the star-watch parties are a campus institution dating back to the 1930s, it's an uphill battle to get the big bulbs dimmed. "On at least one occasion, we managed to get the administration to turn the Tower off during a lunar eclipse," Eakins said, "but that is the only case I can remember."

It's not just the big lights that cause a problem. The UT campus has thousands of pedestrian way lights that need to stay on. "Our first priority is keeping the kids safe," said Robert Speer, electrical distribution manager in UT's Department of Utilities and Energy Management. "Secondly is the energy conservation, and last is light pollution." With state budgets being slashed, the energy conservation issue is becoming an increasingly important part of the university's calculations. UT-Austin's Facilities Services recently announced that the campus fountains will only run for 10 hours a day, rather than the current 17 hours, for an anticipated savings of $40,000 a year. Similarly, cutting down on light pollution would cut the campus energy bill.

Those savings are why the city of Austin announced on July 6 that it will be replacing existing metal halide fittings at seven municipal buildings with more energy-efficient and less light-polluting high-bay fluorescent lights. The numbers speak for themselves: Updating 77 exterior lamps at the Palmer Events Center should cut its annual electricity bill by $21,501, which should recover the replacement costs within four and a half years and save enough energy to power 22 average-sized homes. It's all part of a larger initiative, paid for with American Recovery and Reinvestment Act stimulus cash, to save $400,000 a year by optimizing the energy consumption of 16 city-run buildings. The light retrofitting project will also include day-harvesting equipment, which reduces the amount of artificial light when the sun is shining, as well as occupancy sensors. Austin Energy spokesman Carlos Cordova said, "It's just like our parents would tell us to turn off the lights behind us when they're not needed."

UT has actually been working on its light pollution impact for the last 15 years – first by building homemade reflectors and now by adopting a new lighting standard as part of the campus master plan. The university's new Lunar Optics fixtures meet state-mandated requirements limiting light to 2.5 degrees above the "horizontal" (imagine drawing a line through the middle of a streetlight to create the "horizontal" – anything that goes above that line is considered bad light). However, staff at Facilities Services want to reach full cutoff (zero degrees above the horizontal) by retrofitting existing high-intensity metal halide fixtures with LED lights. Doing so requires a balancing act: While LEDs are cheaper to run and produce a better quality of light, the kits cost $700 – almost three times more than the regular arrays – and there are real questions about their durability. "We communicate with other campuses that use the LEDs, and they're not meeting the 50,000 hours promised life expectancy," said Speer.

For now, UT will continue to experiment with different lighting designs that both save money and cut down on wasted electricity. If all goes according to plan, it should also reopen the heavens to astronomers. "We might even be able to pick out parts of the Milky Way galaxy that you usually have to go out into the country to see," said Eakins, "but that might just be wishful thinking on my part."