How does the patchwork of separate plans for the future of Central Texas fit together? No one knows.

City Hall Hustle: Take a Boardwalk With Me

While Council takes off, the bond battle heats up

DNA Lab to Be Put Under Microscope

An upcoming audit of APD's lab could be just the beginning

Sanders Family to Settle With City?

The Lights of Texas Are Upon UT

What is UT doing about its light pollution?

MetroRail in Search of Riders

The fabulous cocktails, cool atmosphere, and plenty of garage parking will make this a favorite spot for meeting friends for drinks

Simmering controversy between two Sixth Street businesses is boiling over

Since 1970 at the One Knite, Jimmie Vaughan's worn the smile of a blues savior

My dinner with Harvey Pekar – three weeks ago

The Department of Homeland Security tries to take down YellowFever and KAOS Radio. Somewhere Harvey Pekar is laughing.

Sittin' by the Road

Guanabee's Cindy Casares covers the news from a unique angle

I Would Have Filmed Shorter If I'd Had More Time

Yes, it's a period piece, but this cult hit still hits the mark

Too bad this sumptuously appointed film unfolds on a screen instead of a catwalk.

The Girl Who Played With Fire

Nolan's first film since The Dark Knight is a heist picture with an inventive twist.

The Nature of Existence

This documentary treks the globe posing life’s big questions to one and all.

This Robert Rodriguez-produced film doesn't try to be a sequel to the Schwarzenegger picture but, instead, is a new story about humans hunted by the merciless Predators.

Nicolas Cage plays a master sorcerer who selects a seemingly average guy to become his protégé and save New York City from his arch-nemesis.

Not reviewed at press time. This musical is about a group of junior high students competing in a nationwide music video contest.
arts & culture 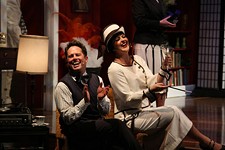 That Obscure Object of Delight

Zach's dreamy Chaperone speaks to the enthusiast in us all

Remembering the man behind American Splendor and the local theatre director

The Man Who Mistook His Wife for a Hat

Letters at 3AM: A Fallen Catholic in a Fallen Church

I can't hide from my sins and, now, neither can the church

In memory of a friend

Is it too hot to crawl? You'll find out this weekend.

ACW gets a (Chris) Hero