Walking Waller Creek Is a Tour Through Wildlife, Wild Flora, and Wild History

Take this self-guided tour from UT's Office of Sustainability, and learn how much wildness this waterway is home to 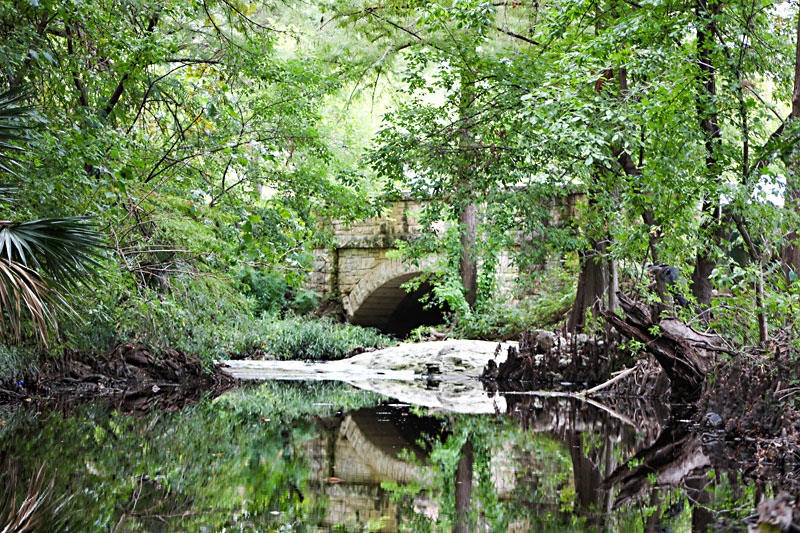 Bridge near MLK Blvd. over Waller Creek – (photo by Kathryn Gatliff for UT Office of Sustainability)

What little you know about Waller Creek has probably dribbled into your consciousness as something needing to be fixed: a flood-prone danger zone getting a $160 million underground tunnel (Waller Creek Tunnel); a trash-strewn urban eyesore inching toward a $250 million redesign and development (Waterloo Greenway). That is the Waller Creek of the headlines but it's also just the creek's southernmost stretch, the part below 15th Street that flows – well, trickles – into Lady Bird Lake. And it's only about a quarter of this 6-mile waterway that wends its way northward past Hyde Park, past North Loop, past Skyview, to its source in the Highland neighborhood. That's to say, there's way more to Waller Creek than messes with multimillion-dollar solutions. And with a little shoe leather and a pair of earbuds, you can learn just how much – in the two miles north of Waterloo Park, that is.

Your instructor in this endeavor is a polymath well versed in botany, biology, geology, and history that goes by the name of Walking Waller Creek. In truth, it's a free self-guided tour produced by the University of Texas Office of Sustainability (accessible with instructions and audio at www.sustainability.utexas.edu/walking-waller-creek), but the folks who put it together – that would be Kristin Phillips and Timothy Riedel, with Kathryn Gatliff providing the lush, you-are-there photos – have given it the character of an easygoing professor who's so enthusiastic for his subject – dropping cool nuggets of fact, telling fun betcha-never-heard-this stories, pointing out fascinating details you'd have totally missed on your own – you wind up captivated by something you had zero interest in before.

Case in point: The first third of the tour focuses on the section of creek that cuts through the UT-Austin Health District with the university's School of Nursing and Dell Medical School and the Dell Seton Medical Center. Over three city blocks, you get a vivid picture of the care taken in the district's development not only to clean up the creek, rooting out invasive species, and reworking the soil, but also to enhance it: boosting the area's biodiversity with dozens of different species of grasses, wildflowers, and trees, many identified here by both their common and taxonomic names (and it's a toss-up sometimes, which is the more tantalizing: Texas mountain laurel, Sophora secundiflora; fragrant sumac, Rhus aromatica; Chinquapin oaks, Quercus muehlenbergii). Pocket prairies containing these and other native plants line the creek and environs, seducing bees and butterflies into pollinating. And you may wind up seduced, too, by this luxuriant and active ecosystem and how carefully it's been engineered to flourish in a modern development.

That, and just as the tour is leading you out of it, Walking Waller Creek asks you to pause and peer through some brush at a shuttered old home – the oldest building on campus, it assures you, and the last of 13 mansions that once stood on the bluffs of Waller in the 19th century. This one, Watson House, originally belonged to Jim Bowie's sister-in-law, but the more intriguing occupants were interior designers Arthur P. Watson and Robert Garrett, who lived there from 1959 to 2009 and partied almost every day of those 50 years. In a piece in L Style G Style Magazine, Garrett is quoted as saying, "The drinks flowed like a river, so that usually smoothed over any otherwise rough spots for our guests. We were known for Arthur's Bloody Marys, for the chateau Pink Gins, and our lethal Velvet Hammers."

Now that's a lively way to close a lesson in contemporary practices in preserving and cultivating a natural environment!

Walking Waller Creek continues to strike that balance of scientific education and historical engagement, past and present, as it guides you across Trinity Street and MLK Boulevard into campus proper and the section of the creek that may be most familiar to visitors to UT. In sharp contrast to the Health District, there's a sense here of diving backward in time. Everything feels much older: the trees, the brush, the bridges, the rocks. And the tour taps into that feeling. It immediately introduces you to Joseph Jones, the English professor who was so devoted to this waterway that for more than 40 years he took his lunch on its west bank. And then he penned a book titled Life on Waller Creek. And then he co-wrote a tour called Walking the Forty Acres: Waller Creek Wilderness Trails and Adjuncts. This tour quotes that tour's reference to this area as a "forest primeval," and as you look at the hulking bald cypress trees with their twisting python roots, the wild undergrowth, the boulders scattered across the exposed limestone creekbed, you can see it. And that prehistoric past is still evident, the tour notes, in visible fault lines and fossils of cephalopods in the creek.

But this section of Walking Waller Creek has much to say about more recent times. You hear about the Horst dairy farm that predated the university in this area; the 1915 flood that killed 12 and swept away the home of a UT custodian; Santa Rita Oil Well No. 1, which kicked off the Permanent University Fund when it struck oil in 1923; the 620 oaks planted on the largely treeless Forty Acres by UT comptroller John Calhoun in the Twenties and Thirties; the barracks from World War II that housed UT's first African American male students when classes were integrated but residence halls kept segregated; and the 1969 Battle of Waller Creek, when students fought plans to knock down trees and pave the creek so the football stadium could be expanded. The tour provides details of the rebellion: students perching in trees to keep them from being bulldozed and, after being pulled out, dragging limbs from the 39 uprooted trees to the Tower steps; Board of Regents chair Frank Erwin bulldozing protocol and calling in police from the city and state to clear the scene and arrest protesters, 27 in all. It was, as the tour says, "the first large-scale suppression of a protest on campus."

The battle, though, is far from the only instance in which the university's students have worked on behalf of Waller Creek. You hear about the efforts of Longhorns to keep tabs on trees, wildlife in the area (red-shouldered hawks, golden-fronted woodpeckers, yellow-rumped warblers, green herons, gray foxes, white-tailed deer, green sunfish, and blotched water snakes have all been spotted), and water quality, especially with regard to chemicals and bacteria (there's a lot of E. coli, alas, so stay out of the water). Waller is dubbed "UT's largest 'classroom'."

As the students come and go, though, we hear of other sentinels who maintain a steady watch over Waller: the staff of such divisions as Environmental Health and Safety and Landscape Services. The latter we hear of and from – they provide much of the narration for Walking Waller Creek, and that communicates a sense of their personal investment in the work they do for this creek. It isn't just a job; it's something closer to stewardship, of the kind that Joseph Jones felt all those years ago. By the time you reach the tour's end just past the spot where Duval runs into San Jac, Walking Waller Creek has made a deep connection with said stream flow from that time to this – and from them perhaps to you.

A version of this article appeared in print on July 31, 2020 with the headline: A Riparian Education

The Past, Present, and Future of Waller and Shoal Creeks
Finally doing right by Austin's waterways