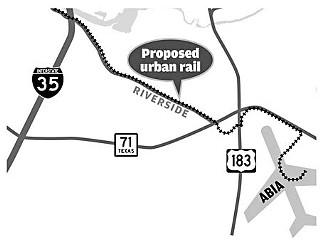 This is how East Riverside Drive looks today. (Photo courtesy of City of Austin)

At a public meeting last Thursday, June 25, a rigorous New Urbanist vision was unveiled for the East Riverside Corridor. Comparable to some of the best plans and projects seen at CNU 17 in Denver, the draft master plan hinges on the premise that rail transit will run down Riverside Drive, between I-35 and Ben White, and on out to the airport. Leveraging the transformational powers of transit-oriented development, the corridor plan shows East Riverside losing its car focus (e.g., a blur of parking lots and strip shopping centers) in favor of a people focus (attractive places to walk, recreate, eat, shop, and live). Handsome three-story architecture surrounds transit stops; East Riverside itself features bike lanes, frequent bus service, street trees, shade features, improved pedestrian crossings, landscaped sidewalks, new parks, and creek-front green space and trails.

This is how it could look under the East Riverside Corridor Plan. (Photo courtesy of City of Austin)

Consultant A. Nelessen Associates Inc. used a visual preferences study – in which Austinites picked photos of good-looking places they liked – to document a strong citizen desire for a New Urbanist redo. Now, how to ensure that the promising plan doesn't remain a pie-in-the-sky vision? The consultant recommends rezoning the area; city planning staff hope to complete that in about a year. (As an immediate fix, City Council will vote soon on rezoning the eastern stretch of East Riverside, making the entire frontage a core transit corridor – which kicks in commercial design standards.) As in Denver's new zoning, the new zoning code would designate six land-use districts, each with context-based and form-based rules. Neighborhood streets wouldn't be allowed any more height, but transit-oriented development would allow commercial districts to rise five to six stories, with optional density bonuses.

Council also will need to provide a funding mechanism, such as tax-increment financing, for the crucial streetscape improvements, pocket parks, and other public investments. And, oh, don't forget that city of Austin rail line! Mayor Lee Leffingwell campaigned on the promise of a transportation bond election next year; he hopes it will fund Austin's long-discussed rail-transit system. If the Riverside segment wins voter approval (even as a future phase), transit-oriented development promises to leave the station years before the actual train.

To review the draft master plan (which goes to council in September) and to comment online, visit www.eastriversidecorridor.com. 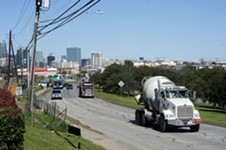