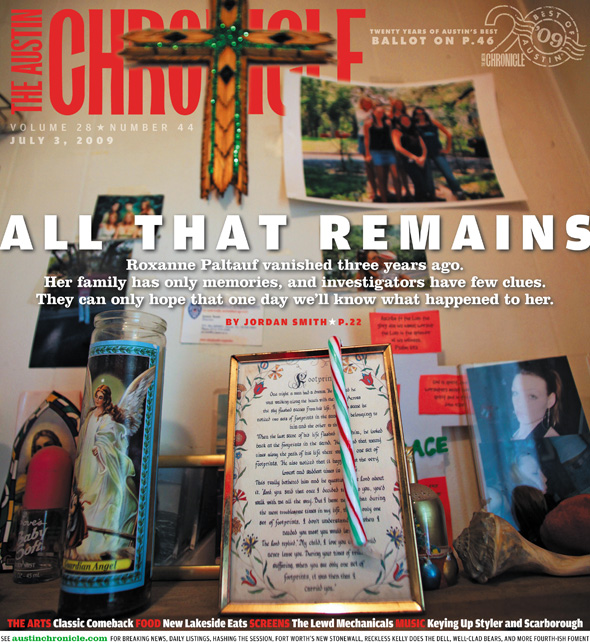 pdf
ON THE COVER:
All That Remains
news 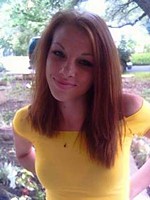 Roxanne Paltauf vanished three years ago, leaving her family with only memories and investigators with few clues

Message to parents: Get to know your kids

Summertime and the living is ... frenzied

Texans may be learning to love their gays – not as much as their voter ID, though

More insights from the Congress for the New Urbanism

Special Session Could End in Fireworks

Cash and criticism for the $623 million toll road When a group of six spends more than $400 on dinner, most of the food should be at least as impressive as the saddles

Cafe Blue's Sunday brunch is highly recommended, but the rest still needs to be worked out

Terredora di Paolo offers delights from the birthplace of wine

Despite our Natural Grocers fumble, readers keep tipping us off to great new eateries around town

I Write the Folk Songs

Explosions in the Sky commemorates the Fourth of July, Harlem signs with Matador, floating down to Whitewater on the Horseshoe, and paying tribute to Sky Sunlight Saxon and the King of Pop

Blood From a Stone
screens

At last week's open forum, the film community gathered to discuss the future of Austin Studios

Contracting and Expanding at KLRU

Local singer-songwriter Jesse Dayton tries on a new role as a psychobilly vampire in Rob Zombie's Halloween II; plus news on Gary Kent, the TXMPA, and Turk Pipkin

How much is that male escort in the window?

Not reviewed at press time. This Hollywood-set battle of the sexes stars two Bollywood stars.

This romantic comedy about a saleswoman and her stalker strains credibility. 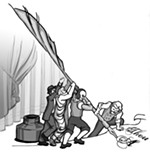 Are the great dramas of yore reclaiming their place on Austin's stages?

In hour 40, these improvisers were still in top form: fresh, focused, and incredibly funny

A bureaucratic heaven, as envisioned by a couple of charming clowns, is sweet

A Love Supreme – The Music of John Coltrane

'The Lining of Forgetting: Internal and External Memory in Art'

At the crest of Beatlemania, 18 and hungry for life was some kind of way to be

Your Style Avatar cleverly distills this weekend's news overkill, so you don't have to

Spectator sports can crush our most ardent hopes and dreams, and that's a good thing

Small places with big names, solving the mystery of white meat, and more