Army Chaplain at Guantánamo to Speak 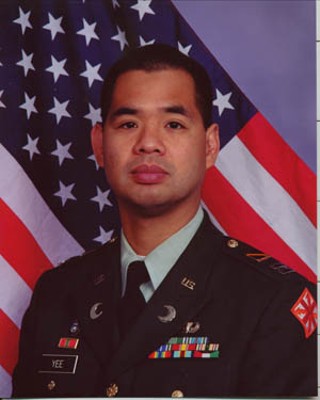 If America is a melting pot, then former U.S. Army chaplain James Yee should be the idealized end result. A third-generation Chinese-American and a 1990 West Point graduate, he left the military in 2005 with an honorable discharge and two Army Commend­a­tion Medals. But before resigning his commission, he was thrown into a naval brig for 76 days and accused of spying, espionage, and aiding the Taliban and al Qaeda – charges that were dropped for lack of evidence.

Yee had been the first permanent Muslim chaplain accessible to detainees at Guantánamo Bay, and on March 20 at 6pm, he will talk at the University of Texas School of Law auditorium about his experiences, the sixth anniversary of the camp, the U.S. government's failure to reach out to moderate Muslims, and his book, For God and Country: Faith and Patriotism Under Fire. "We look at our military operations around the world; it's clear we need an accurate understanding of Islam to win hearts and minds in this so-called war on terror," he said. Yee argues education is essential to combat extremists. "You have to have what we call in the military 'subject-matter experts' on Islam," he said. That was part of his job before being transferred to Guantána­mo, and he feels that it should be a core part of cultural sensitivity training for military personnel stationed in predominantly Muslim countries. "Properly understanding the Muslim faith will only make them better soldiers," he said.

That education works both ways. Former Special Assistant to the President for Homeland Security Frank Cilluffo told attendees at the South by Southwest Interactive Festival that what was needed was "a Tookie Williams of terrorism": respected Muslim clerics who can educate young Muslims in how violent radicals are perverting the word of the Prophet. Yet there is currently no chaplain for the detainees at Guantánamo. Professor Kristine Hus­key, director of UT's National Security & Human Rights Clinic, is helping organize Yee's visit: Along with her graduate students, she represents detainees (see "Blind Justice," Sept. 21, 2007) and has visited the camp several times. "It's a great opportunity to bring in a Muslim cleric whom the government trusts," Huskey said. "But I understand the last chaplain there was a hardcore fundamentalist Baptist." While Guantánamo has slipped off the front pages, Yee believes it will become current again. "It's an issue that all the presidential candidates have talked about," he said, "and it's an issue that the next president will have to deal with."