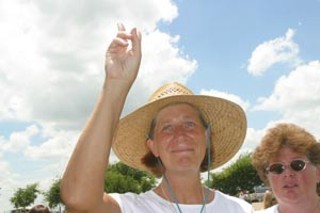 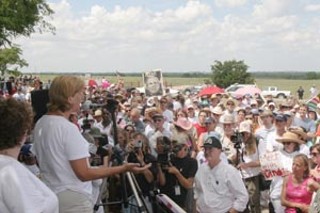 Hundreds of supporters have traveled to Crawford to meet Sheehan and to join her vigil. Many credit the 48-year-old bereaved mother with reinvigorating the anti-war movement. (Photo By Jana Birchum)

Forty-eight-year-old Cindy Sheehan wiped tears from her eyes as she looked southeast along Prairie Chapel Road down the long line of cars – perhaps a mile or more, snaking along the ranching road from downtown Crawford, Texas, toward "Camp Casey," the makeshift but exceedingly well-provisioned camp where Sheehan has lived since Aug. 6. The founder and now international icon of Gold Star Families for Peace is waiting to see if President George W. Bush will make a similar trip down the road from his vacation ranchette to meet with her and other bereaved family members. 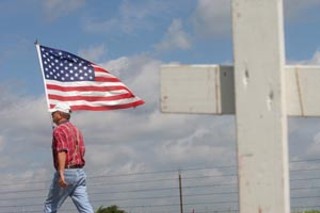 A Bush supporter walks along Prairie Chapel Road, past several hundred white crosses labeled with the names of American soldiers who have been killed while serving in Iraq – including one for 24-year-old Casey Sheehan, who was killed in Sadr City in April 2004, nearly a year after Bush declared that "major combat" was over. (On Monday night, many of the crosses were vandalized by a pickup driver dragging a pipe; he was arrested when a cross flattened his tire.) (Photo By Jana Birchum)

Sheehan wants the president to explain why her son, 24-year-old Casey Sheehan, and nearly 2,000 other American soldiers – not to mention countless Iraqis – had to die in his Iraq war. She wants to know why Bush and his administration lied about nonexistent weapons of mass destruction, and about the imaginary connection between Saddam Hussein and al Qaeda. Most of all, she wants to know when U.S. troops will be coming home. 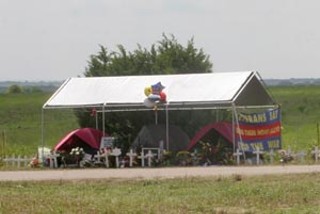 Sheehan has been camping in a drainage ditch just down the road from George W. Bush's vacation ranch since Aug. 6. She says she won't leave until September, when Bush is scheduled to return to Washington, D.C. If necessary, Sheehan says she'll follow him to the Capitol, where she'll continue her vigil until Bush agrees to meet with her. (Photo By Jana Birchum)

Sheehan's camp, cramped into a drainage ditch at the intersection of two ranch roads, has grown to include a long line of tenting canopies erected by supporters, many of them not stereotypical protesters, but grieving parents whose children have died in the war, who have spontaneously packed up and traveled from all over the country – from Washington state, Pennsylvania, Minnesota, and California, and elsewhere – to join Sheehan's vigil in rural Texas. Camp Casey has become their Field of Dreams. They're all waiting in the scorching heat to see if Bush will venture out into the sun to answer Sheehan's questions about the war. 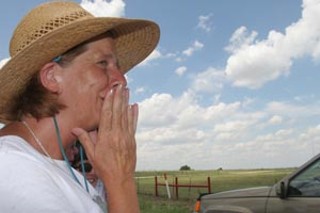 Watching the seemingly endless line of vehicles traveling down Prairie Chapel Road toward her campsite on Saturday in support of her vigil, Sheehan began to sob. Camp Casey has become the anti-war movement's Field of Dreams. (Photo By Jana Birchum)

On Saturday, Aug. 13, it would take nearly an hour for the line of cars weaving along Prairie Chapel Road to dwindle, and for the hundreds of passengers inside them to assemble at the apex of a wedge of road to listen to Sheehan. Sheehan is a mother from Vacaville, Calif., whose grief over her soldier son's death in Sadr City on April 4, 2004, galvanized her growing determination to see the war end and the troops come home. In the months since, she has testified before Congress and spoken before various groups, including a recent convention of Veterans for Peace. "Who knew that the beginning of the end of the occupation of Iraq was going to start in Crawford, Texas?" Sheehan asked a crowd of about 400 supporters on Saturday afternoon. "Who ever would've thunk it? Who knew that America would finally stand up and say, 'We're tired of this shit! Bring our troops home!'"

In less than two weeks, Sheehan has been catapulted to iconic status; she has stolen the national media spotlight – due, at least in part, to the contingent of otherwise idle White House correspondents stationed in Crawford during Bush's monthlong vacation – and has reinvigorated anti-war activists who regard her as the spark behind a blossoming new peace movement. "If there is [another] Selma, it will be because of the spark that is ignited here," said Ray McGovern, a retired CIA intelligence analyst who has joined Sheehan in Crawford.

Although Bush has said he won't venture out to Camp Casey to meet with Sheehan, public opinion seems to be leaning toward her effort, as general public approval of Bush's war effort continues to decline. As of the weekend, the latest CNN/USA Today/Gallup poll reveals that just 44% surveyed actually support the war, while 57% say the war has made the U.S. "less safe from terrorism," reports the San Jose Mercury News. An AP/Ipsos poll places the approval ratings even lower, with just 38% saying they approve of Bush's handling of the war, according to the San Francisco Chronicle. Sheehan's own reaction to the groundswell of support in Camp Casey reflected a similar shift in national perspective. "I thought my hope was dead. I thought they'd killed my hope too," she told supporters on Saturday. "But they can't kill hope and love, it's alive here in Crawford, Texas."

Bush has passed by Camp Casey only twice – on Friday, Aug. 12, on the way to and from a $100,000-per-plate lunchtime fundraiser at the Broken Spoke Ranch, just east of the camp. As Sheehan clutched a white cross bearing her son's name, and a string of protestors waved signs, Bush's motorcade rushed past, cruising by a line of nearly 1,000 more white crosses fixed with the names of American soldiers and placed along the roadside by members of the Veterans for Peace and CodePink, two of the growing number of activist groups that have joined Sheehan's effort.

While avoiding Sheehan, the president has certainly kept busy – as hundreds of protesters streamed into Crawford on Saturday, Bush went mountain biking for two hours with several reporters (including the Statesman's Ken Herman and a writer from Sports Illustrated), had lunch, took a nap, and then rode a helicopter to Waco to attend a Little League playoff game. Lots of people want to talk to the president, Bush told Herman, and it is "important for me to be thoughtful and sensitive to those who've got something to say," he said. "But ... I think it is also important for me to go on with my life, to keep a balanced life," he continued. "And part of my being [balanced] is to be outside exercising." While Bush spent his Saturday keeping his balance, at least six more American soldiers were killed in Iraq. At Camp Casey his words rang hollow with the hundreds of people – many of them parents of U.S. soldiers, dead or alive – who have dropped everything to make this pilgrimage. "My time is a precious commodity also," Sheehan told a reporter from CBS News, "but he's on vacation. And you know what? He works for me, I don't work for him; I pay his salary."

Sheehan has vowed to continue her vigil until Bush finally agrees to speak with her or until U.S. troops come home. She will remain in Crawford throughout August, and then will follow Bush to Washington, D.C., in September, if necessary, where she said she'll pitch her tent "as close as I can [get] to him; we're going to keep the pressure on until he brings the troops home."

For more from Camp Casey, see austinchronicle.com. Cindy Sheehan's blog from Crawford is at www.truthout.org, which also contains links to her recent speeches.