The Emmis Shoe Falls at KLBJ 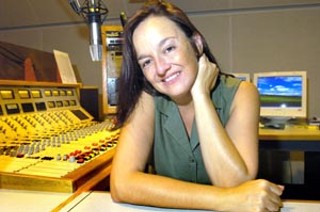 After 22 years playing the Rolling Stones and Aerosmith for Austin's hard rock faithful, Peg Simmons is still reeling from the abrupt end last month to her midday gig at KLBJ-FM. "It truly broke my heart," Simmons said. "I'm sad, depressed. I'm in the 'I suck' mode."

When Emmis Communications bought KLBJ-FM, KGSR-FM, and four other Austin stations last year, company President Jeff Smulyan told Simmons and the rest of the staff not to expect major changes in format or personnel, although he was quick to add to a reporter, "never say never."

At KLBJ-FM, for 30 years Austin's symbol of guitar-crunching rock, "never" and the modern realities of the radio business arrived in June, 12 months after Emmis took control of the stations from family-owned LBJS Broadcasting. In addition to Simmons, afternoon co-host "Powermouth Patty" Lotz was dumped, and station icon Johnny Walker – voted "Austin's Favorite Deejay" five times in the Chronicle's annual readers poll – was told he would move to part time in August and begin prerecording his nightly show.

As a locally owned, family-run operation, KLBJ was a rarity. Several members of the staff, including Simmons, Walker, and operations manager Jeff Carrol have worked at the station for over a decade – a sharp contrast to the mercenary culture that is the norm in today's radio industry. "The whole place was like a family, innocent and sweet. It was like radio Pleasantville," says Lotz, who co-hosted the afternoon show for two years. "I used to tell them how lucky they were. It's not like this out there."

Carrol, operations manager for Emmis' six local stations – KLBJ-AM and -FM, KGSR, KROX, KEYI, and KDHT – called the moves a "business decision." Carrol, who has worked for KLBJ for 20 years, was visibly upset, close to tears, when he broke the news, according to Simmons and Lotz. Both were given several weeks of severance. "It's very hard for me in some respects," Carrol said. "I'm longtime friends with these people. I hate to see it happen, but sometimes it has to."

Carrol says Walker's fate is still undecided, although staffers say he has already been told he's moving to part time and his show will run on tape. He was originally laid off and offered severance, sources say, but instead opted to forego the severance and work full time through August in order to maintain his insurance. (Walker declined to comment.)

Emmis paid $105 million last year for a 50.1% interest in the six Austin stations, buying out the Lyndon B. Johnson family, which operated local stations for 60 years. The Indianapolis-based company now owns 27 radio stations and 16 television stations around the country, as well as Texas Monthly and several other magazines.

Like many of the fast-growing media companies, Emmis has been struggling with its debt load, particularly as broadcast ad revenues decline industrywide. For the first quarter of 2004, the company reported a $75.8 million loss, reflecting a $97 million charge for debt restructuring. The stock is trading at about $20 a share, close to its 52-week low.

Since taking over the Austin stations, staffers say, Emmis has been steadily tweaking KLBJ's rock format, reducing the meager number of songs recorded in the last decade that occasionally crept on to the station's playlist. Management has also moved to increase the number of commercials per hour.

Despite Smulyan's assurances that there would be little change, Emmis has moved to put its stamp on all its Austin stations, including turning contemporary hits KXMG into hip-hop "Hot 93.3" and moving to prerecord more shows, known as "tracking" in the business. "Voice tracking is a cost-saving method," said Dave Downey, who covers rock radio for AllAccess.com, an industry Web site. "Nowadays when companies are concerned about the bottom line and cutting costs, it makes good business sense."

While Carrol notes there was a sharp drop in KLBJ-FM's ratings last year, the dumped deejays counter that ratings always fluctuate in the wacky world of Arbitron, which still bases its ratings on a notoriously flawed diary system. "The LBJs would never have gotten rid of us" for a ratings dip, Lotz said.

Station general sales manager Fred Smith said the average audience for the 10am-3pm time slot actually increased in the last year among the station's core demographic – men 25-54 – growing from an average of 3,200 to 4,500 listeners an hour. On the station's Web site, afternoon deejay "Big Mike" Steele, Lotz's old partner, wrote that the show's ratings for March were "the highest numbers in our nine months as a show."

But several large advertisers, including 24 Hour Fitness, recently cut their ad buys, sending a signal that changes were likely on the way. By dropping Simmons and Lotz, and moving Walker to part time, the station effectively cut two positions. Simmons was replaced by overnight deejay Loris Lowe, who doubles as music director.

"They're looking at the bottom line, and I understand that, but you know what? It hurts," Simmons said. "It really hurts." Simmons, the single mother of two young daughters, says she's busily looking for work. But she believes her days as a rock deejay are likely over. "I always loved radio," she says, "but it's not fun anymore."