Nine months after the Federal Com­mun­i­ca­tions Commission moved to shut down an unlicensed Austin radio broadcast, the pirate station is still on the air, openly defying the government order.

"I'm not giving up, because this is about the truth," said Deborah Stevens, the public voice behind the station, as she eats quiche at a South Austin diner. Her voice rises a couple of octaves when she mentions "the truth," Barack Obama's birth certificate, or "the cartel" – especially the cartel. "It's all about the cartel, the monopoly cartel, the Texas Association of Broadcasters and the FCC protecting their cartel illegally," said Stevens, part of a group loosely known as Radio Free Austin.

For more than a decade, the group has used frequencies at 90.1FM and 100.1FM to broadcast shows discussing what they see as the government cover-up of 9/11, the growth of the police state, and the accuracy of various prophecies. Their guru is Alex Jones, self-styled leader of Infowars, man's last hope against the much-discussed and constantly feared New World Order. Some commuters may know the station from the handmade signs touting liberty and the station's frequency occasionally unfurled on a fence along MoPac, north of Downtown.

Last November the FCC ordered Stevens and her husband, Jerry, to pay a $10,000 "forfeiture" for operating the station without a license. Also fined was former Travis County Sheriff Raymond Frank, 84, who served as sheriff in the Seventies and ran for the post again in 2008 on a platform that included reducing penalties for marijuana possession. For many years, the station broadcast from a transmitter on an old 80-foot-tall wind tower on Frank's Mount Larson property.

"Hell, no," said Frank, when asked if he had paid the forfeiture. However, the Radio Free Austin transmitter was reportedly moved from Frank's tower after the FCC forfeiture notice was served. The station currently broadcasts on 90.1FM from an "undisclosed South Austin location," sending out a relatively low-power signal between 200 and 300 watts. Although the quality varies, it can usually be heard fairly clearly around Downtown.

Stevens believes the FCC has no legal grounds to shut the station down. There have been few court challenges to the FCC's authority. "They rely on people rolling over," Stevens said. Most pirate broadcasters are "flakes" who play music and quickly cave to the FCC's threats, she believes. "It's very clear it is legal," Stevens says with conviction.

Stevens is not a lawyer. She runs an website called RuleofLawRadio.com, which focuses on "reclaiming our freedom with Scripture, truth, law, fundamental principles, & comedy!" Her Internet radio show, which emphasizes ways for ordinary citizens to "take back control" of the legal system, is part of the 90.1FM lineup. Stevens is also a musician, playing in bands such as Root 1 and Three Shoes Posse with her husband, Jerry.

She started working with the station in 2007, after Jerry happened upon a broadcast of Jones' show. "It totally changed our lives," she said. Now she's absolutely sure that the mainstream media "is totally controlled, bought, and paid for by the government, no question about it." To Stevens, the Internet, public access television, and catchy road-sign posters are not enough – the message must be on radio. "You have to be in the cars," she said.

Despite the murky legal waters, Stevens believes she's on firm footing. The frequency for Radio Free Austin was carefully chosen to minimize chances of interference, she said. As long as the station is not causing interference, the FCC has no right to shut it down, she insists. "Ridiculous," responds Oscar Rodriguez, vice president of the Texas Association of Broadcasters. The FCC clearly has the authority to respond to unlicensed broadcasters, he says. "They are certainly doing harm to the broadcasters following the rules and standards of the federal government."

The nearest station on the radio dial to 90.1FM is public radio station KUT, at 90.5FM. KUT has not recorded any specific instances of interference, but it has received complaints from listeners, said Jim Reese, manager of digital technology. "From a technical standpoint, there is no way they could legally operate from that location on 90.1, even if they were inclined to do so," he said.

Either way, it doesn't matter to the FCC. Any stations "transmitting at certain frequencies and certain powers absolutely need a license, whether they are interfering or not," FCC spokesman Eric Bash said.

But it's often difficult to shut down the broadcasts. The FCC is not an enforcement agency. Cases are turned over to the Depart­ment of Justice for prosecution, which often has difficulty tracking transmitters and their owners. In Berkeley, Calif., a group of unlicensed broadcasters has been fighting the FCC in court for more than a decade.

At this point, Stevens' only contact with the DOJ was a letter warning her to pay the debt, which she promptly ignored. If the DOJ and FCC don't follow the letter of the law, she promises a wave of lawsuits. "I don't think they want to mess with me," she said. She's already filed one suit, challenging the credentials of the FCC's field operative. The case was quickly dismissed; Stevens says she will appeal.

Rather than backing off, Stevens wants to grow the Austin station. She plans to set up a trust to cover the operation, and the transmitter will soon be moved to a new tower in West Austin, broadening its reach, she says. The trust will operate as a nonprofit and no one will be paid a salary, she says, although she hopes to get reimbursed for her legal services. The station already generates revenue by selling advertising spots to the Inter­net radio networks carried on the station*, which tend to feature advertisers like SurvivalistSeeds.com and the latest book on the "shadow government."

"We're doing this for the people," Stevens said, even though she gets a little fuzzy about how many actual people are listening. But this is where Stevens wants to make a stand. She practically dares the DOJ to move against her. "If they refer it to a collection agency, I will come down on them like a ton of bricks," she said. The legal case could go on for years, she promises.

*[Editor's note: After we published this story, RuleofLawRadio.com’s Deborah Stevens told us that she in fact only sells spots for her own local “network” – not the other networks that also air on her station as reported above.] 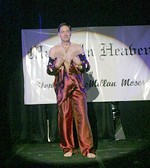